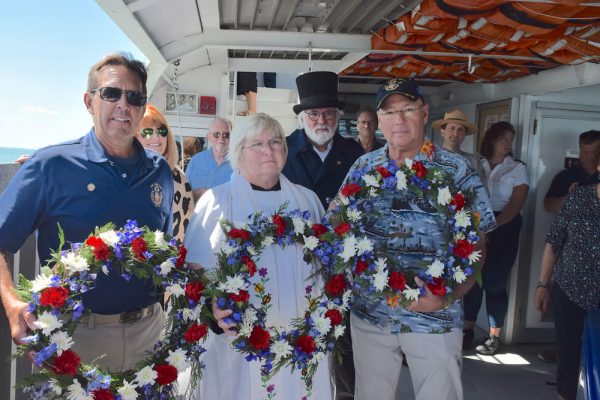 Ready to lay wreaths at the Battle of Lake Erie site west of Rattlesnake Island are, left to right, President David Zavango of The Perry Group, Reverend Mary Staley of St. Paul’s Episcopal Church in Put-in-Bay and Marc Burr of The Perry Group. (Photos by D’Arcy Patrick Egan)

A large ferry boat filled with revelers from The Perry Group celebrated the 208th anniversary of the Battle of Lake Erie on Friday, Sept. 10, bringing some pomp and circumstance aboard The Jet Express as they visited a small, nondescript red buoy a few miles west of Rattlesnake Island.

“Ladies and gentlemen, at this very moment in time, 208 years ago, you stand on the battle site,” said President David Zavango of The Perry Group, a long-time Miller Boat Line captain. “Imagine if you will, a canon ball coming through a wall of your kitchen as you stood over the sink looking out the window. Imagine the sound, the smoke and the carnage on that day.”

Great Britain and Canada may be our friends today, but 208 years ago they fought a bitter battle against us on the inland sea of Lake Erie. It was a key fight in the War of 1812, and also for the very existence of the United States as we know it today. 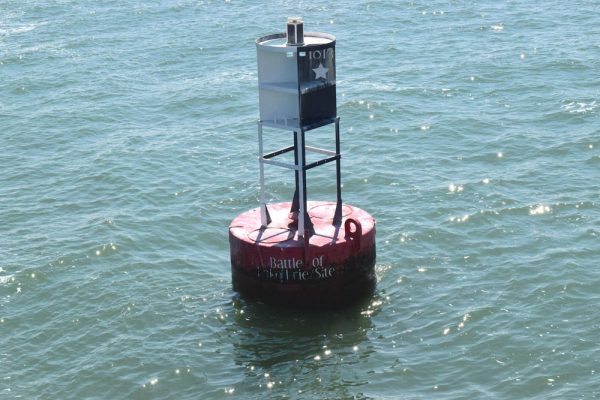 “The British and Captain Oliver Hazard Perry had been itching for a fight for months,” said Zavango, whose non-profit group is also known as The Friends of Perry’s Victory. “The British Flotilla had blockaded the shipbuilding areas outside the surrounding waters of Lake Erie. Only a sandbar and American canons stopped the British from destroying the new America-built fleet in Lake Erie.”

On the morning of Sept. 10, 1813, the American lookouts at Put-in-Bay saw the British Navy approaching the Lake Erie Islands from the west. Sounding the alarm, the American fleet headed west to meet them. At the helm of the Lawrence, Perry was battered by the long-range British canons. 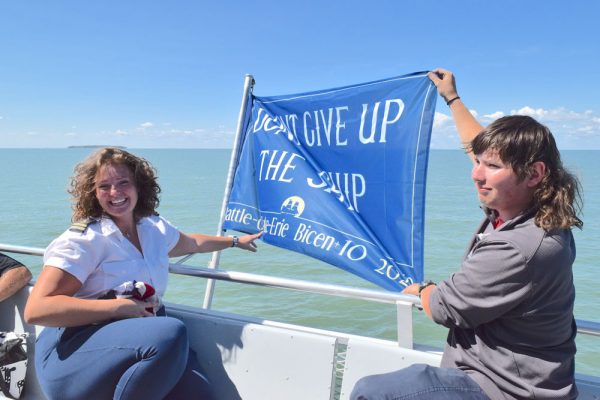 The famous battle cry of The Battle of Lake Erie still resounds today: “Don’t Give up the Ship.”

”Perry miraculously lowered a row boat from the Lawrence and made his way back to the Niagara,” said Zavango. “The British were prepared for Perry to retreat or surrender.

“As luck would have it, the winds changed and Perry sailed right at the British Fleet with everything he had left in his fleet. The British captains of the two vessels were both injured or killed, and the command of those vessels was turned over to the next in line. As one of the British ships moved to come about, the boat went backward and became entangled as the British lost three-quarters of their firepower.” 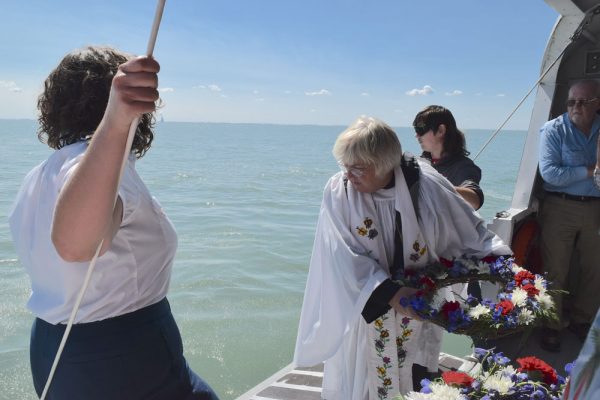 Reverend Mary Staley of St. Paul’s Episcopal Church in Put-in-Bay gets ready to toss one of the Battle of Lake Erie wreaths to the waters around the special buoy marking the battle site.

The British surrendered at 3:15 pm., said Zavango. On that day, 27 Americans were killed, 96 wounded, and 40 British sailors were killed and 94 wounded.

“Perry sent a favorable dispatch to U.S. General William Henry Harrison, ‘We have met enemy and they are ours.’,” said Zavango.

The Battle of Lake Erie was a major turnaround for American forces, and the victory convinced its’ citizens that their country would be free from the rule of Great Britain. The War of 1812 allowed America to gain control of Lake Erie, and prevented the British from seizing control of the Northwest Territories in the middle of the present-day United States.