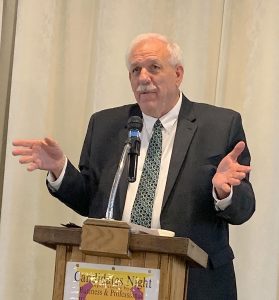 I’m Lou Wargo, and I am running for Judge of the Ottawa County Municipal Court.

Upon graduating from Cornell University and the University of Toledo Law School, I moved to Port Clinton to serve residents as an Assistant Ottawa County Prosecuting Attorney, prosecuting misdemeanor as well as serious felony cases.

I’ve represented the Villages of Elmore, Genoa, Marblehead, and Put in Bay, prosecuting their village ordinance cases, while engaging in the private practice of law as a solo practitioner and as associate attorney and partner in the law firms of Meyer, Kocher, Loeffler & Wargo, as well as Loeffler & Wargo.

Raising my family here, I have continuously called Ottawa County my home for over 37 years. In 2000, I was named Acting Judge of the Municipal Court and, in 2003, became the Court’s Magistrate, where I’ve presided over thousands of cases annually ever since.

Serving as Magistrate has also afforded me the opportunity to participate in the administration of the Court’s annual budget, as well as secure grant funding for Court programs. I’ve also presided over Ottawa County’s first Drug, Alcohol, and Mental Health Court, and its successful evolution into the current Intensive Supervised Probation Program.

With over 220 hours of Judicial College training and education, my commitment is to stay abreast of technological changes to ensure easier access to court records and information, while addressing the needs of the citizens of Ottawa County.

I would appreciate your vote on Tuesday, Nov. 5, for an efficient, effective, and experienced Ottawa County Municipal Court.