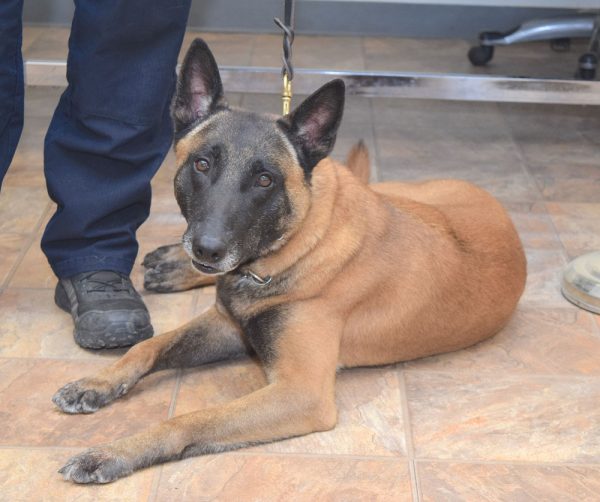 Luke takes a break from being sworn in as the new K-9 Cop for the Village of Marblehead. 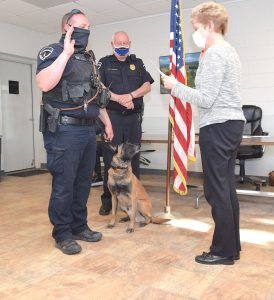 Luke, a four-year-old Belgian Malinois, is the new K-9 Cop for the Village of Marblehead. He and and handler, Jeremy Danklefsen, were sworn in at Wednesday’s council meeting. (Photo by D’Arcy Patrick Egan)

When Patrolman Jeremy Danklefsen presented his new sidekick to the Village of Marblehead at last week’s council meeting, Luke the K-9 Cop was ready, willing and more than able.

“I’ve been working with Luke for the past six months, and we’ve been bonding quite nicely,” said Danklefsen, who joined the Police Department in the Village of Marblehead last fall. “Another officer had been involved with his training, and things were a little out of tune.

“Luke is a very smart dog, though. He’s loyal, obedient and has quickly been learning what his job is now.”

A Belgian Malinois who is four years old, Luke weighs in at about 65 pounds and has the distinct blackish face, ears and chest with a fawn-colored body that distinguishes the breed. They are known for their keen sense of smell to find explosives, accelerants and narcotics, making them the perfect working dog for police departments and the military.

Training is critical, though, and Chief Kenn Thellmann of the Marblehead Police likes the early team work he’s seen from Luke and Danklefsen.

“I’ve been told by a security dog trainer who’s been working with the pair that Danklefsen is one of the best new K-9 trainers he’s seen,” said Thellmann.

Luke’s ability to find drugs in a house or vehicle have been deemed as very good. While playing fetch with his handler, Lukes’ athleticism and enthusiasm is obvious. So is his loyalty to his partner.

As Mayor Jacqueline Bird swore in the four-legged police officer, Danklefsen was the center of Luke’s attention.

“He keeps an eye on me all of the time,” said Danklefsen, with a laugh. “Believe me, having an energetic partner like Luke is never boring. I’m hoping for a long, enjoyable career together in Marblehead.

“Working for a veteran such as Chief Thellmann, I’ve already learned a great deal about police work from him. He’s great to work with.” 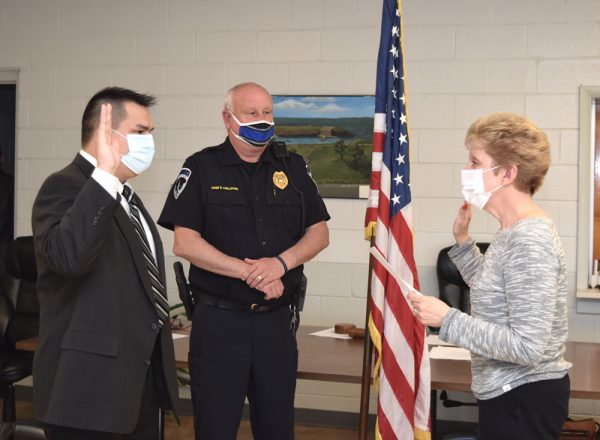 Danklefsen had worked for the Ottawa County Sheriff’s Department in its Dog Warden Division, as well as on on the Bay View police force, where he grew up and attended Margaretta High School. He and his wife have three children, two boys and a girl.

At Wednesday’s council meeting, Chief Thellmann and Mayor Bird also swore in Alex File as a part-time summertime police officer for the Village of Marblehead. A native of Lansing, Mich., File was praised for being community-oriented and having an excellent record as a police officer at Bay View and while doing security at Cedar Point.