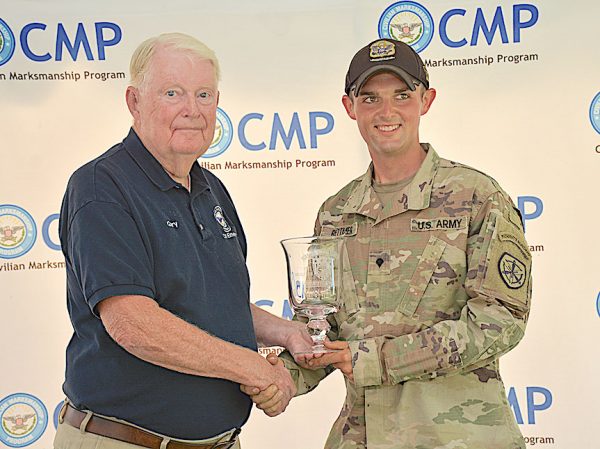 Luke Rettmer of the Army Marksmanship Unit was the overall competitor of the 2400 Service Rifle Aggregate Match at the National Matches at Camp Perry.

CAMP PERRY – SPC Luke Rettmer, 22, of the U.S. Army Marksmanship Unit (AMU), started strong in his 2021 National Matches rifle series appearance, claiming the over-all competitor spot in the Service Rifle category of the 2400 Aggregate Match. The competition was held on the famous Camp Perry Viale Range and hosted by the Civil-ian Marksmanship Program (CMP) as part of the CMP Highpower Rifle Champion-ships.

“I was happy with my performance,” Rettmer said. “Every day I step on the range, my goal is to shoot all the shots in the 10- or X-ring, regardless of the outcome of the score – and I feel like I almost did that.”

A Washington native and Distinguished marksman since 2015, Rettmer joined the AMU Service Rifle Team in November 2019 after completing Basic Training at Fort Leonard Wood, Missouri. Also in 2019, he added U21 World Long Range champion to his long list of achievements that includes past winner of the Col. Bill Deneke Trophy, which is awarded to the top overall junior athlete of the National Matches President’s Rifle, National Trophy Individual and National Trophy Junior Team aggregate. He even made the prestigious President’s Rifle 20-person shootoff – the only junior to do so in 2018.

“There were a couple shots that got away from me,” he went on of his 2400 Aggregate showing. “But I felt that my performance reflected my training well.” 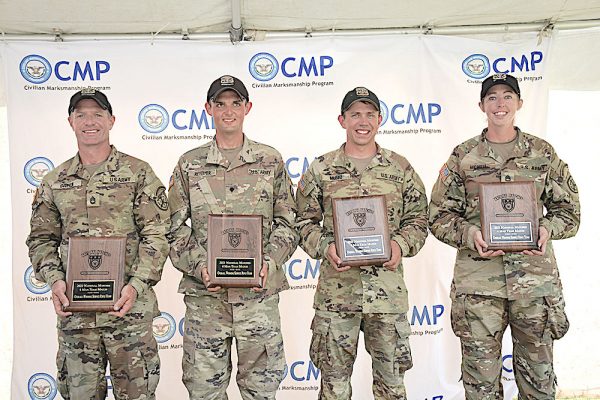 Team CMP’s James Fox, 36, of Albany, Oregon, was the Service Rifle High Civilian each of the three days of separate 800 Aggregate Matches. Fox claimed the overall aggregate win in 2019 and landed in second behind Rettmer at this year’s event, trail-ing by only two points and marking an outstanding 131 X-count.

High Junior of the Service Rifle Aggregate was Dustin Carr, 19, of San Diego, Califor-nia, who fired a score of 2363-101X. SSG Amanda Elsenboss, 32, of the Army Nation-al Guard earned the honor of High Woman after compiling a score of 2373-120X for seventh place overall.

Outside of Service Rifle, the Aggregate was also open to Match Rifle competitors. Leading the 2400 Match Rifle Aggregate and named High Military competitor each of the three days was SFC Brandon Green, 36, of the AMU. High Civilians during the daily matches included Benjamin Pickel, 41, of Crystal Lake, Illinois, Fritz Hempel-mann, 61, of Wheeling, West Virginia, and Team CMP’s own Robert Gill, 62, of Visa-lia, California.

Other leading scorers of the CMP Highpower Rifle Championships were:

View a complete list of results of this and other 2021 Camp Perry National Rifle Matches at https://ct.thecmp.org/21nmrifleresults.