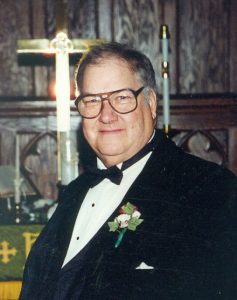 Lynn Howard Jones also known as “Toadie” to classmates and “Sloppy Pops” (with ice cream on top) to his kids and grandkids passed away Dec. 24 at Stein Hospice in Sandusky. Lynn was born on Aug. 14, 1936, to Yuta and Quinton Jones. He was the oldest of 4. As a child he collected tires, papers & toothpaste tubes for the war effort. He was active in boy scouts and 4-H member as a kid. Lynn was a 1955 graduate of Port Clinton High School. He was active in school, and he lettered 3 times in football, 4 times basketball, and 2 times in both Varsity Club and Chorus. Lynn married Jane Berkheimer on May 10, 1958, and they were married for 46 years until she passed. They went on to have 11 children, 18 grandchildren and 4 great grandchildren.

After high school he became an auto parts man, a mechanic and then a GM Master Mechanic. As a GM Master Mechanic, he was often asked to trouble shoot problems with new vehicles. At one time, he was asked to become a GM instructor in Cleveland but turned it down to stay in Port Clinton with his family and the community he loved. He was a mechanic all his life but his love for autos didn’t stop at work. He was a crew chief and set-up man for many racing teams including the sportsman division #41 racing team that was later driven by his son Ross and crewed by his sons Bruce and Kurt along with other family members. And a large fan club consisting of the rest of the family. Later, he became the crew chief to #22 sprint division driven by his son-in-law Clay Keim along with many other racing teams over the years. He was known as the guy you went to when you couldn’t figure it out. When wrenching became too hard, he turned to his other love-classic cars.

After raising all of his children it was finally time to have a hobby of his own. He co-founded the Erie Shore Cruisers and attended many car shows with his children and grandchildren, passing on his love of cars to them, driving his very altered 2000 Chevy S10 that was his pride and joy which you might have seen driving around Port Clinton. He was an avid sports fan-whether it was Ohio State football or basketball, Cleveland Cavaliers, Indians or even the Browns. He was an avid racing fan of course- NASCAR, dirt track, drag racing.

He enjoyed attending and visiting with his fellow classmates at the many reunions and mini reunions of the class of PCHS 1955. Lynn was very proud that his family was some of the first settlers in the Port Clinton area. And he loved to tell the history to his family to keep it alive.

He came to love baking cakes after Jane’s passing-often making cakes for family and any other gatherings he went to-his favorite being pineapple upside down cake in a cast iron skillet.

It was at Lynn’s request that anyone attending the celebration of his life that they wear any Ohio State, Cleveland Cavaliers, Indians, or Browns, Racing or classic car attire. Visitation will be Thursday, Dec. 30, from 2-8 p.m. at the Gerner-Wolf-Walker Funeral Home & Crematory, 216 Washington St., Port Clinton, where funeral services will be conducted at 11 a.m. on Friday, Dec. 31. Interment will take place in Lakeview Cemetery, Port Clinton, at a later date. In lieu of flowers, you can make a donation to Stein Hospice or a charity of the donor’s choice.

The family would like to thank Magruder Hospital ICCU and Stein Hospice for their excellent care he received at the end of his life. Online condolences may be shared with the family at www.walkerfuneralhomes.com.