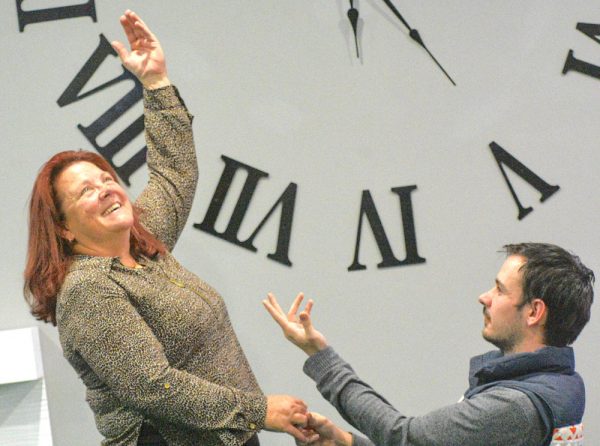 Lynne James will dance in honor of her late husband, Nick James, when she competes at Dancing with the Stars on Saturday, Nov. 19. Dancing with her will be professional dancer Gregory Lowe.

When Lynne James met her late husband, Nick James, at a theater audition in 1989, she instantly disliked him. But as so often happens in fairytales, Lynne found her Prince Charming where she least expected it.

Standing in the wings waiting for their stage cues, Lynne discovered that Nick was “a good listener,” and she fell in love. By Christmas 1994, Lynne, Nick and Lynne’s daughter, Jaci, were living in Chicago, and Nick surprised Lynne by proposing on a theater stage – to both her and Jaci – dressed as a toy soldier. 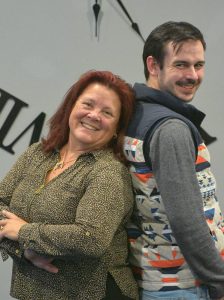 Lynne and Nick decided to have a small wedding in 1995 to quickly join their little family together, and they planned to have a more elaborate wedding later in the year. When Lynne suggested that Nick plan the small wedding, he turned to his employer, FAO Schwarz in Chicago.

“Nick said to me, ‘We’re doing this wedding for your daughter, so let’s make it a fairytale wedding. You be the princess, and I’ll be the soldier, and we’ll get married under the clock tower at FAO Schwarz,’” Lynne said. “We met in a theater, got engaged in a theater, and got married in a toy store. We never ended up having a big wedding.”

Lynne lost her Prince Charming when Nick died in August 2021.

“It was a hard thing. I had the best years of his life,” Lynne said. “In the end, I had the fairytale for the longest time.”

On Saturday, Nov. 19, Lynne will honor her prince charming when she dances in his memory at Dancing with the Stars, a fundraiser for Ottawa County Family Advocacy Center. Dancing with her will be professional dancer Gregory Lowe.

Other dancers competing are Alex Morgan-Johnson, Nate Daniels, John Davenport, Sandy Mclean and Rose Huskey. Dancing with the Stars will be held at Carolyn’s Sunrise Hall in Milbury. Doors open at 5:30 p.m., and dinner begins at 6 p.m. Tickets can be purchased from the dancers or by calling 419-301-0225.

“This is our biggest fundraiser of the year, and it’s a lot of fun,” said Ottawa County Family Advocacy Center Executive Director Connie Roe. “This is our 14th season. We’re really excited. We’re going to have a really good turnout.”

Money raised at the event will help fund the center’s programs, including CASA, GrandLove and TNT Mentoring. The dancers compete two ways. The Mirror Ball Trophy will be presented to the dancer who raises the most funds for the center, and competition judges Bert Fall, Pat Adkins and Debbie Tester will give the Judge’s Choice award to the best dancer.

Dancing in Nick’s memory is especially meaningful to Lynne because Nick donated his time and videography skills to many local causes, including Dancing with the Stars.

“Nick really elevated this event,” Roe said. “It’s a well-done, professional event. I give him a lot of credit for making it what it is today.”