Magistrate Lou Wargo off and running as Municipal Court Judge 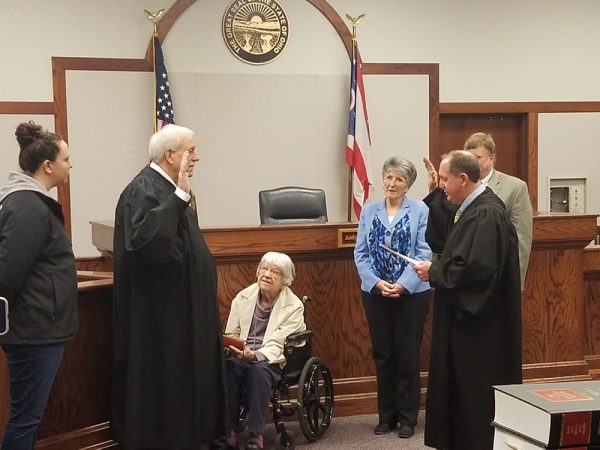 There was never a doubt that Louis P. Wargo III would be an attorney, and long ago the tall, lanky sportsman found a home in the Ottawa County courts.

Wargo, 64, was a magistrate under Judge Frederick “Fritz” Hany III for 16 years. When Hany decided to finally step down as Municipal Court Judge after 29 years, Wargo stepped up to run for the post.

“But first I tried to convince Hany into running for another term,” said Wargo, with a laugh. “I really liked being his magistrate, and I enjoyed working with him. We had been friends for a long, long time.”

Magistrates are appointed, and judges are elected, so Wargo successfully ran against Michael Bassett for the post in November.

“The fun part of being a judge is to be able to help people, to make a difference in people’s lives,” said Wargo. “When I was running for judge, I was walking down the street one day and a woman came running towards me to give me a big hug.

“She told the woman she was with, ‘This man saved my life. He put me in jail, but that was what I needed to turn my life around.’

“It’s always gratifying when you can make a difference, and in her case I obviously helped her get her life back on track.”

Wargo said he decided at an early age that he wanted to become a lawyer.

“I traveled with family to Columbus to watch my late uncle, Ken Garber, be sworn in as an attorney by the Ohio Supreme Court. I was only 8 or 9 years old, but I remember being dazzled by it all, and told my family then and there that I wanted to be an attorney, too.”

After graduating from Huron High School in 1973— his father, Louis Wargo Jr., was police chief of Huron — he went to Cornell University, and got his law degree from the University of Toledo in 1981. He was a 6-foot-5 basketball star in high school and at Cornell, but an injured knee as a senior ended his athletic career.

“Now my avocation, beside the law, is fishing and hunting,” he said. “I grew up fishing on Lake Erie — my dad and aunt had tackle shops in Huron — and back then I could take the family beagles out by what is now Nickel Plate Park in Huron to chase rabbits.”

Wargo was an assistant prosecutor in Ottawa County from 1982-88, a prosecuting attorney on village ordinance cases for Elmore, Genoa, Marblehead and Put-in-Bay, and an acting judge for the Ottawa Municipal Court from 2000-2003 before being named magistrate.

All of his years of courtroom experience have prepared him well.

“The transition this month could not have been smoother,” said Wargo with a large smile.