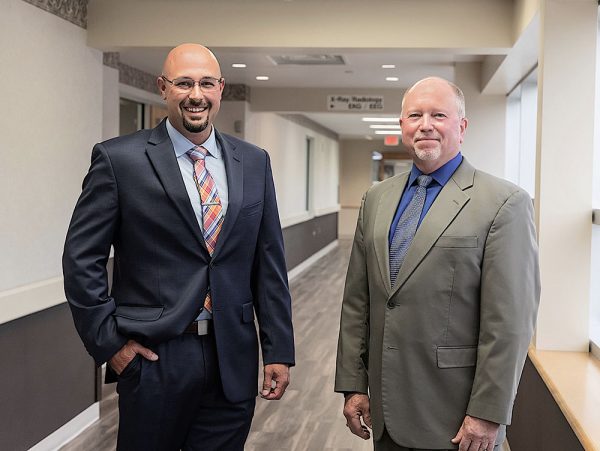 Nick Marisco (left), has been selected as Magruder Hospital’s President and CEO beginning on Oct. 1. Todd Almendinger (right), Magruder’s current President and CEO, will retire at the end of 2020.

As CFO at Magruder, one of Almendinger’s most cherished achievements was eliminating the hospital’s debt and strengthening its financial position. Magruder remains debt-free today.

Almendinger has been active in the Port Clinton community, serving on several chamber boards, business development organizations and social groups. He is a graduate of Bowling Green State University, with an undergraduate degree in Healthcare Administration and a Masters in Business Administration. He has been a resident of Port Clinton since his employment with Magruder in 2006.

Almendinger will serve as Hospital Senior Advisor until January 2021, when he will begin full retirement.

“I am leaving Magruder in great shape and with solid leadership with Nick at the helm. That makes me feel good in my transition into retirement,” said Almendinger. “Truly, I have enjoyed this last journey of my career, and Magruder will always hold a special place with me.”

Since that time, Marisco has been instrumental in helping lead the organization into a cultural transformation. This journey has allowed Magruder to become a leader in the nation for patient satisfaction, safety and quality.

“I am excited and humbled to continue my career with Magruder Hospital. This is a special place, and I’m proud to be part of a team that truly values people, care and safety,” said Marisco. “I know we will continue to affect the community in a positive way, and work with a vision that benefits all people in our area.

“Our mission is simple: Improving Lives Together. I look forward to continuing that mission in my new role as CEO,” he said.