Maniaci ready to put down roots with Marblehead Police 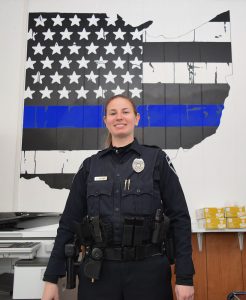 After a stint in the U.S. Navy after graduating from high school, Erica Maniaci found the Vacationland region of the Lake Erie shoreline to be the place where she wanted to live and work.

“I grew up about 45 miles north of Detroit, but one of my first jobs was at Cedar Point, and I later worked at Kalahari,” she explained. “I love the Lake Erie region. And for some reason, I was fascinated with security and law enforcement.”

She had already seen a lot of the world while at sea with the U.S. Navy, including stops at ports in Portugal, Lebanon, Greece and her favorite, Italy, because of her Italian heritage.

Once back in Ohio, though, Maniaci dropped anchor at EHOVE Career Center in Milan. Armed with a law enforcement degree, she worked her way up with part-time police jobs in Castalia, Margaretta and Milan before joining the Marblehead Police Department a couple of weeks ago.

“The Village of Marblehead is such a wonderful place to live and work, and I’ve been impressed with Chief Kenn Thellmann and the officers here,” she said. “Having worked at Cedar Point and Kalahari, I understand Vacationland, its’ mix of tourists and local residents, and seasonal changes in the climate.”

Marblehead has a staff of four full-time police officers, and a veteran leader in Chief Thellmann. The police chief of Walton Hills, just south of Cleveland, he retired after 38 years a couple of years ago. Missing the police work, he filled a vacancy on the Marblehead force.

Maniaci, 27, is an Xbox video game fan, enjoys riding jet skis, wandering the Lake Erie shoreline and had been eager for a full-time law enforcement job.

“There’s a lot to do here, from the short trips to Kelleys Island to mixing with the visitors at the lighthouse. I like to help tourists capture a memorable photo by using their camera to take a picture of them,” said Maniaci.

When on duty, Maniaci is easy to spot, all dressed in black and sporting a bulky but well-equipped Police Equipment Duty Belt. She’s usually wearing a friendly smile, as well.

Police work is dominated by male officers, she acknowledged, but more women are getting into law enforcement.

“Many people are less intimidated by a female officer. Most of the people I deal with are very friendly, and just here to have an enjoyable time,” Maniaci said. “This is my career choice, and I’m delighted to become a full-time member of the Marblehead Police.”