When Old Man Winter arrives to put a cover of ice on Lake Erie, ice fishermen rejoice. Sportsmen fire up their snowmobiles and all-terrain vehicles to tour the hard water, and sailboats on runners scoot across the hard water.

For fun-loving folks, it is a new season for adventure. And the U.S. Coast Guard crews at the Marblehead Station have to be ready.

“We break out the ice rescue gear and ramp up our ice rescue classroom training a month before the ice arrives,” said Chief Warrant Officer Bethannie J. Kittrell. “When the ice does get thick enough, it’s time to have our crews practice rescue operations, setting up scenarios that regularly happen on the ice.”

“We have a lot of specialty gear we use at this time of year,” Kittrell said. “From dry suits to special boots that have spikes on the soles, allowing us to easily walk on the ice, it helps us to stay safe, as well.”

Three major rescue boats come into play. The Coast Guard has a large, swift airboat that can cover miles of ice and rescue stranded anglers and people whose recreational vehicles have gone through the ice.

If there’s someone who has walked out and gone through the ice, the Oceanid Swiftwater Rescue Boat is best, an inflatable that can carry two or three people. The MARSAS ice rescue sled is like a small surf board that can speed up the rescue response and winch a victim quickly back to shore.

“The little tracks on the MARSAS dig in to the ice and give the victim a quick ride,” said Kittrell. “We also use cold water rescue slings as a flotation tool, which can be clipped into a line that will pull people out of the water.”

“When it’s this cold, we wear dry suits that keep us warm while we’re in the ice cold water,” said Kittrell. “There is minimal risk for our officers, who are limited by the weather conditions. As it gets colder, officers have to shorten their time in the water.”

That included Kittrell, who took a turn taking dunk.

“I’ve loved working at the Marblehead station since June 2017,” she said. “We’re originally from Columbus, but I spent a lot of time here while growing up. My parents lived on Kelleys Island, we kept a boat on West Harbor and camped at the state parks.

“My grandparents build a home in Marblehead, and my husband and I were married at the Marblehead Lighthouse. I’ll get a new assignment in about a year and a half, and I’d like to head to the Cleveland Coast Guard station next.” 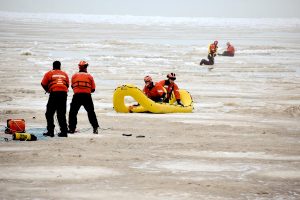 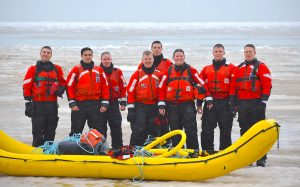 Members of the Coast Guard simulate a cold water rescue of one of their officers who has gone through the Lake Erie ice a few hundred yards offshore. The officers are wearing dry suits and using a variety of lines and an inflatable rescue boat to retrieve them. The Coast Guard’s ice rescue training is much-needed at this time of year as ice fishermen and adventurous snowmobile and all-terrain vehicle riders head offshore. Last week’s training exercise off Lakeside had about 10 officers out on the ice practicing rescue techniques. (Photos by Brenda Haas)