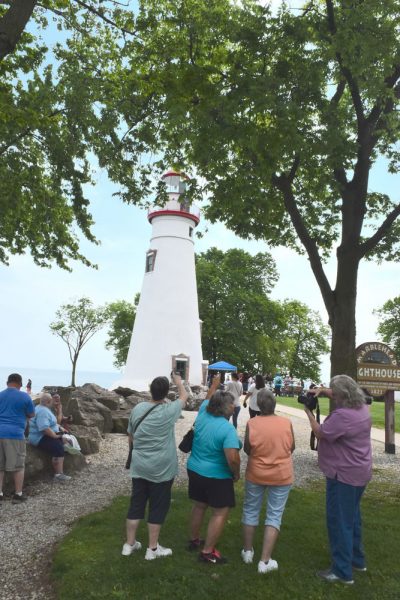 Bring your camera! The Marblehead Lighthouse on the Marblehead Peninsula on Lake Erie is so popular that the Ohio Department of Tourism called it the most photographed attraction in the Buckeye State. (Photo by D’Arcy Patrick Egan)

MARBLEHEAD, OHIO — Perched on one of the prettiest places on Ohio’s North Coast, the Marblehead Lighthouse on the Marblehead Peninsula is a familiar sight around the Buckeye State.

A favorite of many Ohioans, the lighthouse is portrayed on many Ohio license plates. It has been splashed in travel publications and has been touted as one of the most photographed attractions in the Buckeye State. An Ohio State Park, is is perched on beautiful limestone rock that offers picnic areas and views of Lake Erie, Sandusky Bay, Kelleys Island, South Bass Island and Cedar Point Amusement Park.

“We invited everyone to climb the lighthouse stairs for the amazing scenery and to enjoy a day of outdoor fun in honor of this amazing beacon.”

On most summer days the Village of Marblehead is a bustling little tourism town of about 900 with the oldest continuously-operating lighthouse on the Great Lakes. It still shines brightly, although lighthouse keepers are not needed any more for the 50-foot tall lighthouse. Marblehead is also home to a U.S. Coast Guard station, which operates and maintains a high-tech mechanical lighthouse beacon that projects a LED green light that flashes every six seconds and is visible for 11 nautical miles.

Since its construction in the early 19th century, the lighthouse has provided a steady beacon since 1822, a much-needed landmark for sailors seeking the protection of Sandusky Bay. It has also served as a popular subject for photographers and painters. The village also provides ferry service to nearby Kelleys Island, a 20-minute trip for visitors and their vehicles.

Ohio State Parks abound in the area, from spacious East Harbor State Park on the Marblehead Peninsula to state parks on Kelleys, South Bass, Middle Bass and North Bass Islands and a smaller park and boat launch on Catawba Island. The Lakeside Daisy Nature Preserve is a stone’s throw from downtown Marblehead, surrounded by the busy LaFarge Quarry that ships limestone to the world.

The Marblehead Lighthouse State Park was crowded with hundreds of visitors on Saturday to enjoy the bicentennial moment, and enjoy the entertainment, food trucks, birthday cake, games, giveaways, ODNR naturalists with some of the area’s wild animal friends, a touch-a-truck, Smokey Bear, free lighthouse tours, and other activities.

The park will be open daily from noon-4 starting this Saturday and running through Sept. 5, with a $3 fee to tour the lighthouse. Bicentennial events may expanded park hours. Here’s a list of Marblehead Lighthouse bicentennial events already scheduled for this summer:

For an updated list of events, and times for the events, visit the Marblehead Lighthouse Historical Society at: marbleheadlighthouseohio.org

In the 1980’s federal officials declared many lighthouses “surplus property” and plans were made to tear down the Marblehead Lighthouse and replace it with a steel pole topped by a light. Several Marblehead residents formed the Marblehead Lighthouse Historical Society in 1998 and the group helped broker the agreement with Ohio to accept ownership of the lighthouse and its grounds. The society agreed to supply volunteers to help operate the park for visitors, and has paid for and constructed several new buildings in the park, including the U.S. Lifesaving Service Museum and a new restroom facility.

About 25,000 visitors climb the lighthouse tower each summer, and it’s estimated more than 1 million visit the park each year, said