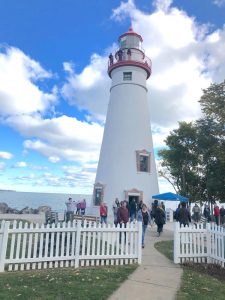 A steady flow of lighthouse lovers celebrated the 200th anniversary of the Marblehead Lighthouse during the annual Lakeside-Marblehead Festival on Saturday. While hundreds enjoyed climbing the stairs for one of the very best views of the Lake Erie Islands, dozens of yellow perch fishing boats anchored offshore of the lighthouse throughout the weekend to fill their coolers. (Photo by D’Arcy Patrick Egan)

Mother Nature also contributed, as she usually does the first weekend in October. The temperatures were a little cool, but the weekend was bright and sunny.

With Shores & Islands Ohio joining in on the celebration, the tourism agency in Ottawa and Erie counties helped to bring visitors and local residents together, crowds filled the streets, shops and eateries in Lakeside to listen to troubadours such as Tom Todd, the One-Man-Band. Kids put their beautiful and unique pumpkins on display. The local Farmer’s Market was well stocked, hayrides and boat trips ferried visitors and the Dance Jam on the Hoover Auditorium lawn had young and old jumping.

The Children’s Arts & Crafts appealed to the youngest children, and families gathered around cozy fire pits burning on Walnut Street in the afternoons last weekend. Or watched the family movie, “The Nightmare before Christmas, at Orchestra Hall.

“There’s just so much to see and do at Lakeside, at Marblehead State Park and at the Wolcott Keeper’s House, the first residence of the early keepers of the Marblehead Lighthouse,” said Shirely Stary, in her 17th year as Director of Arts Programming at Lakeside.

Stary gathered groups of volunteers to handle the dozens of already-carved pumpkins entered in the annual pumpkin carving contest.

At the Marblehead Lighthouse, families trudged up the many stairs of the iconic, 200-year-old lighthouse. On the cool, clear bluebird day, the effort was worth it for the very best view of the Lake Erie Islands just to the north of the Marblehead Peninsula.

As if on cue, the fabled yellow perch fishing on Lake Erie had erupted this week, and dozens of small fishing boats were anchored within shouting distance of the lighthouse. Nor’east winds had tempered the fabulous walleye fishing that anglers had enjoyed all summer in the Walleye Capitol of the World.

The lighthouse was the perfect location to chat with visitors, said U.S.Coast Coast Auxiliary Flotilla Commander Jacob Gill of Clyde, who was recruiting auxiliary for the Marblehead Coast Guard Station.