Marblehead lights the way on Lake Erie for 200th year! 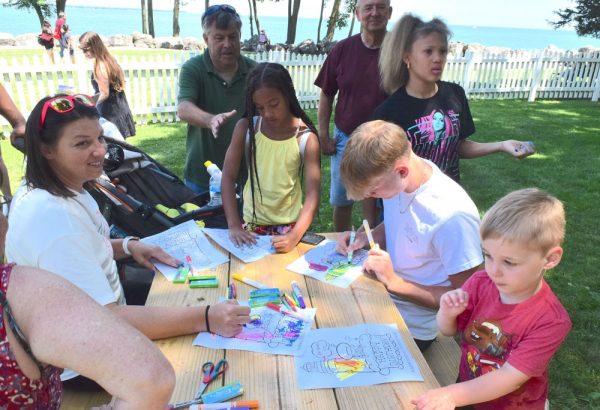 The Ohio Department of Natural Resources celebrated the 200th birthday of the Marblehead Lighthouse on June 22 with cupcakes and ice cream, and allowed people to climb the steps to the top of the lighthouse. 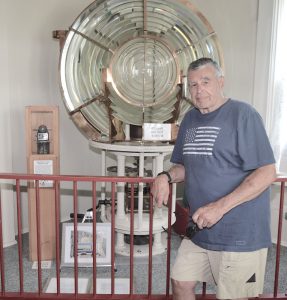 The 200th anniversary of the light being turned on at the Marblehead Lighthouse to guide boats after dark on Lake Erie was celebrated on Wednesday, June 22, a typical sunny day on the Lake Erie shoreline. It’s a party that will continue for the rest of the summer, said President Dennis Kennedy of the Marblehead Lighthouse Historical Society (MLHS).

“We began planning the bicentennial party about four years ago,” said Kennedy, aided by his wife, Maureen and a large committee of local folks. “We are a grass roots group, kind of a MLHS round table discussion that evolved into a MLHS committee planning a wide range of events,” he said. “It ranges from concerts, celebrations and educational displays to the 232nd birthday party for the U.S. Coast Guard on Thursday, Aug. 4 at noon.

For a full list of events yet to come this summer, visit marbleheadlighthouseohio.org.

“The Marblehead Lighthouse is the oldest continuously operating lighthouse on the Great Lakes,” said Kennedy. “It’s contained in the one of the smallest state parks in Ohio — although it is one of the busiest state parks in the Buckeye State. The only smaller park is Oak Point State Park, at just 1.5 acres, near Put-in-Bay on South Bass Island.”

The Marblehead Lighthouse began to start drawing crowds of summertime visitors in the late 1960s, said Kennedy, and in this summer of the 200th anniversary and all the events, the number of visitors has increased exponentially. All of the happenings there are free, and the beauty of Lake Erie, the Marblehead Peninsula and the Lake Erie Islands, which are visible from the rocky shoreline, are all major reasons. 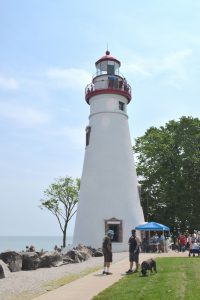 The Marblehead Lighthouse is one of the most-photographed tourist attractions in Ohio, and young artists enjoyed putting crayons to paper at the recent birthday party.

About 1.3 million people visit the park each year now to climb the lighthouse steps, enjoy the Lake Erie shore or just have a picnic on the pristine grounds and enjoy the well-appointed amenities.

The local economies of Marblehead, Catawba Peninsula and Port Clinton, the only city in Ottawa County, are booming. State parks abound on all of the Lake Erie Islands.

The Village of Marblehead is still a sleepy town of less than 900 people, and the sprawling LaFarge quarry that mines limestone rock and ships it around the Great Lakes and the world, and the village’s retail shops and restaurants are busy throughout the summer. The Kelleys Island Ferry based in Marblehead provides access for vehicles and visitors going to Kelleys Island, a tourism destination from spring through fall.

The bustling Cedar Point Amusement Park is a short distance to the east across Sandusky Bay. The Lake Erie walleye fishing this year is legendary, with a huge fleet of fishing guides, and plenty of motels and restaurants. The new Music on Madison Stage in downtown Port Clinton is popular, and the party town of Put-in-Bay on South Bass Island keeps the Miller Ferry Line and the Jet Express busy all summer.

From the top of the Marblehead Lighthouse the Canadian waters of Lake Erie are visible about nine miles away, including Pelee Island, Lake Erie’s largest island.

“It’s a bit of a surprise to many of us who have lived here for years, that many of our visitors don’t know very much about the Great Lakes,” said Kennedy. “They look across Sandusky Bay, where you can easily see the roller coasters and other rides at Cedar Point, but we’re often asked if that is Canada.”

For all of the information on the summertime celebrations, which are all free events, said Kennedy, just visit the Marblehead Lighthouse Historical Society’s long list at: marbleheadlighthouseohio.org.