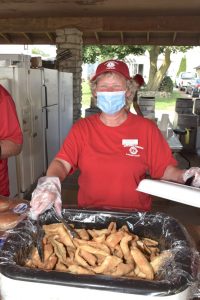 The 30th annual Marblehead Lions Club Festival will be held Saturday, Aug. 27 in downtown Marblehead and featured will be the parade and festivities and, of course, sandwiches and dinners of Lake Erie’s popular yellow perch. Heidi Gast is serving platters of perch again this year. (Photo by D’Arcy Patrick Egan)

The Marblehead Peninsula Lions Club will host its 30th  Annual Perch Festival on Sat., Aug. 27 from 10 a.m. to 5 p.m. at James Park in downtown Marblehead. The event is made possible through the cooperation of Lake Erie Shores & Islands.

The festival will kick off at 10 a.m. with a parade through downtown Marblehead. The Marblehead Lighthouse will serve as grand marshal of the parade in honor of the historic landmark’s 200th anniversary in 2022. Entry into the parade is free and entrants are invited to walk, ride bikes, ride on golf carts, drive vehicles or ride on floats.

In addition to delicious food and live music sponsored by NOMS Healthcare, festival activities include vendors, raffles (including the grand prize of $2,022), 50/50 drawings, a car show, kids games and other festivities.

The festival will be held rain or shine. Contact Jane Danchisen Pittman for parade applications at 540-327-4502 or jpittman@su.edu or Marla Hirt for vendor spaces at mhplcperchfest@gmail.com.