When it comes to writing, connecting with peers may make all the difference. The Marblehead Peninsula Branch Library in Marblehead is now offering two monthly writing groups for writers in the Lakeside/Marblehead and surrounding areas. Facilitated by published personal essayist and past Pittsburgh news reporter Brenda Haas, A Writer’s Life Q&A meets on April 2 at 6 p.m., and Writers Wanted Critique Group will be held on April 9 at 6 p.m.

“If you have a story to tell and want to connect with other like-minded writers, these groups provide a resource for just about anyone with a love of the written word,” says Haas, now a Lakeside resident and freelance writer for area businesses and organizations.

A Writer’s Life Q&A, typically held the first Tuesday of every month (April 2, May 7), is an informal discussion group – high school age and up – welcoming writers of all skill levels to chat about the writing life and ask questions of the group. Future sessions are expected to include guest speakers and cover topics such as submitting to an agent/publisher, writing a picture book, expressing life through personal essays, developing settings/characters, news writing and other venues.

Haas indicated she struggled to find other area writers upon moving to Lakeside in spring of 2018. She spends much of her spare time writing children’s fiction, of which she’s loved for decades thanks to “Some Pig” named Wilbur of E.B. White’s “Charlotte’s Web.” A new library card was a must, of course, and, in November, she initiated a library critique group for writers with active writing projects.

The Writers Wanted Critique Group, typically held the second Tuesday of the month (April 9, May 14), is a structured, participatory peer group for writers, 18 and older, interested in giving and receiving critique on existing works-in-progress. Whether one is writing a novel or picture book or perfecting a personal essay for magazine submission, the peer critique offers a unique opportunity for a second set of eyes.

Over the past several months, an eclectic mix of newsletter writers, novelists, picture book storytellers and essayists have provided feedback for each other. Participants bring up to six pages of a single project, double-spaced, for peer review.

“I’m making my first attempt at writing fiction since high school,” said Dan Moulten, a critique member. “Professionally, I’ve done a lot of technical writing, which is very dry and stiff by nature. Fiction needs to be just the opposite. The honest feedback I’ve received from the group has really helped with that transition … and I like the different perspectives.”

Haas, who was a member of a Western PA Society of Children’s Writers and Illustrators (SCBWI) writing critique group for over 15 years, sees tangible value in seeking out other writers.

“Putting my manuscript in front of my peers or talking about my failures and successes is incredibly helpful,” said Haas. “Having critique partners, in the past, taught me so much. I wouldn’t be the writer I am now without that support. No one understands a writer quite like another writer.”

Because the initial critique group fluctuated, often attracting writers interested in networking or those seeking answers to questions about the publishing process, the one group became two, resulting in two very different outlets for writers with varying needs.

Specific information about the two writing groups, and guidelines on giving and receiving critique, may be found at www.PowerOfPages.com, or contact Haas directly with questions, brendahaas@live.com. Her website also includes a writing blog. 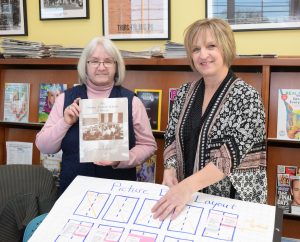 Maryanne Laubner displays her new book, “Danbury Township Schools: A History” while veteran writer Brenda Haas explains the specifics of laying out a picture book to be printed. (Photo by D’Arcy Egan)