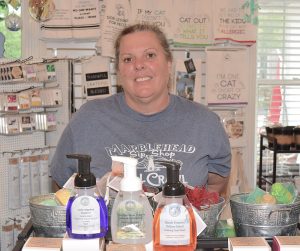 A line of special natural soaps created by Patti Wandover at the Marblehead Soap Company in Marblehead have been named after nature preserves around the area. The sales of the soaps also reward The Nature Conservancy, said Matt Kovach at the group’s office in Marblehead, who received a donation of $200 this week. Wandover displays some of the new soaps, which are named after the Great Egret Marsh Preserve and the Lakeside Daisy Preserve in Marblehead, the North Pond Preserve and the Sheele Preserve on Kelleys Island, the Cedar Meadow Preserve on Catawba Island and the Massie Cliffside Preserve on South Bass Island. (Photo by D’Arcy Egan)

Magruder Hospital has been recognized with a 2022 Performance Leadership Award for excellence in Quality. Given by The Chartis Center for Rural...