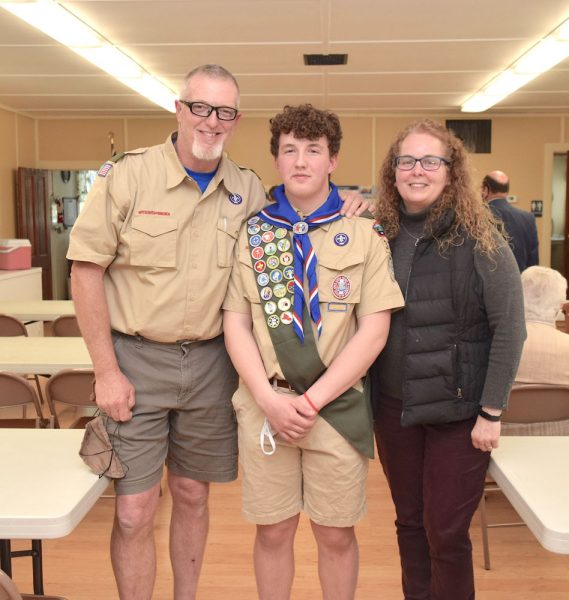 Jim and Julie Frattoroli congratulate their son, Nate, on earning his Eagle Scout Badge at his Troop 331 ceremony on Sunday at St. John Lutheran Church in Marblehead. (Photo by D’Arcy Patrick Egan)

Nate Frattoroli of Marblehead is an all-around outdoorsman and athlete, and he capped off his Boy Scout career on Sunday. Frattoroli, 18, and a senior at Danbury High School, was presented his prestigious Eagle Scout Badge by Troop Leader Ray Johnson.

“Nate’s project to earn his Eagle Scout Badge was to install a basketball hoop and refurbish the pool table at St. John Lutheran in Port Clinton,” said his mother, Julie. “He had help from the nine other Scouts in Troop 331, including his brother, Owen. Because of the small size of the Troop 331, they’ve been a very close-knit group of boys.”

Frattoroli has played basketball, football and run track at Danbury High School. He has throughly enjoyed the troop’s adventures in the outdoors.

“Nate’s favorite outing was to spend a few days and nights with the troop on the Appalachian Trail,” said Julie. “He enjoys scouting, especially the outdoors adventures such as canoe trips and hiking.”