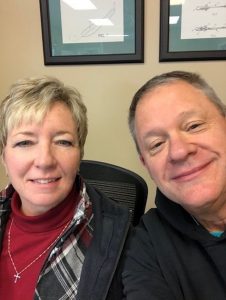 The development of the Reef Runner lures more than 30 years ago in Scott and Betsy Stecher ’s Cherry Street garage on the Marblehead Peninsula helped to revolutionize the walleye fishing industry on Lake Erie, and around the country.

While Scott Stecher will continue to design Reef Runner fishing lures for the next five years, the Stechers have sold the lure company to the Acme Tackle Company of Fort Atkinson, Wisc.

The Reef Runner line will be the first diving plugs, or crank baits, in its catalog.

“Betsy and I won’t be retiring from the lure-making business,” emphasized Stecher. “I’ve agreed to a five-year contract to continue working with Acme Tackle’s Research & Development team to develop new lures and lure colors, including 3-D printing technology.”

Stecher said he already has two new lure designs in the works that should hit walleye waters around the country in 2023.

Acme officials plan to continue the Reef Runner product lines that have proven popular, including the banana-shaped 800 Series, as well as the Li’l Ripper, .44 Mag and Cicada.

Acme Tackle’s President Robin Hancock has long been a fan of the Reef Runner product line.

“We have been talking to Scott Stecher about Reef Runner for a long time and this couldn’t be a better opportunity for both of our companies and customers,” said Hancock. “Acme has built a reputation of quality, innovation and producing lures that really work.

We are eager to bring our capabilities to Reef Runner. Our team is already hard at work designing new products for the brand.”

In 2008 they created a new company headquarters in Marblehead.

Putting Reef Runner lures in the spotlight in recent decades has been a Lake Erie walleye fishery that has been rated by the experts as the best in the world. Getting the message out was success in many of the top walleye tournaments around the country, especially on Lake Erie.

As tournament anglers transitioned from spinnerbaits and jigs to crank baits to catch trophy fish as fishing electronics let anglers take a new look at walleye habits and locations. Trolling for walleye has become the tournament standard, with Reef Runner Lures leading the way.

“But I still tested our new lures in the swimming pool at Danbury High School, just down the street,” said Stecher, with a laugh.

Living on the Marblehead shoreline of Lake Erie, Stecher had also taught biology at Genoa High School and had a passion for coaching high school football.

Matt Bichanich, Vice President of Sales & Marketing at Acme Tackle Company, said he was excited to add Reef Runner to their extensive portfolio of brands.

“Reef Runner is an iconic brand and crank baits are a product category we weren’t in. Now we can provide our customers with one of the best fish-catching crank baits available,” he said. “I have been using their lures for a long time and I am looking forward to introducing Reef Runner lures to more anglers.”

Acme Tackle’s Hard & Soft Fishing products has roots dating back to 1922, when their first brand, Uncle Josh, began manufacturing in Fort Atkinson, Wisc. They have grown to represent nearly every tackle category on the market for both ice and open-water fishing across their family of brands, which include Kalin’s, Beaver Dam and Uncle Josh.

All of Reef Runner’s products will soon be available at: www.acmetackle.com.