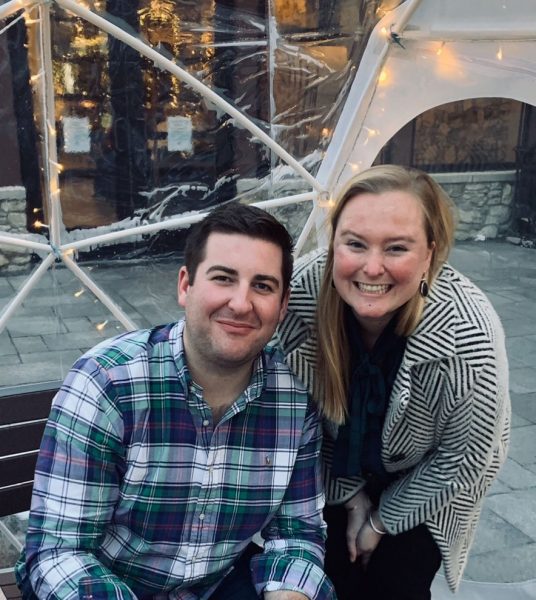 Margaret and Marshall Drew have settled in on Catawba Island, and Margaret is now the Principal of Immaculate Conception School in Port Clinton.

Margaret Drew made her debut as the new Principal of Immaculate Conception School in Port Clinton on Monday, and it was a match made in heaven.

“I was lucky enough to finally come over the Sandusky Bay bridge and begin working with children in my home town,” said Drew, with a laugh. “I love teaching younger children, and have taught at parochial schools all of my career. Immaculate Conception School staff has been very warm and welcoming, and I’m thankful to be a part of the Immaculate Conception family in Port Clinton.”

Catawba Island became home town for Margaret and her husband, Marshall Drew, when he joined the Catawba Island Club as its food and beverage manager. The Drews met at Purdue University, and have been married for four years as she moved up the ladder in the world of elementary education.

“I discovered that I truly loved teaching kids, and loved to help them grow and learn,” she said. “All kids can learn, but not always on the same day or in the same way. And I like being a school principal. It is the best way for me to be able to help kids learn, and that is so important.”

Drew grew up attending a Catholic school in Zionsville, Ind., and developed an interest in teaching while attending and working at Camp Tecumseh, a YMCA summer camp. She first taught kindergarten in inner-city schools in the Chicago area before heading back to school to get her master’s degree from Lourdes University in Educational Leadership.

She worked at Sandusky Central Catholic teaching kindergarten through third grade, and last year served as Principal for St. Peter School in Huron.

“There is a lot of appeal for me in teaching the youngest students,” said Drew. “They’re such little sponges, so eager to learn. And the moment they learn something, their faces light up.

“The nicest gift you can get as a teacher., though, is to work for a good school, because it becomes your home away from home. A good school like Immaculate Conception is destined to become my happy place.”

Even though she is a Chicago Cubs fan — the Drews named their yellow Labrador retriever, Wrigley, after the Cubs’ home field — she is also becoming a Cleveland Guardians fan these days.

Drew firmly believes in a Catholic education, and will be charged with examining the possibility of slowly expanding Immaculate Conception School in the years to come to include Middle School classes.