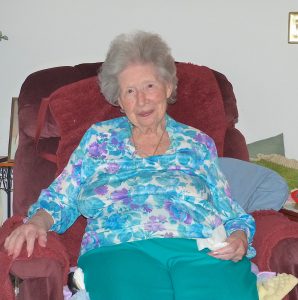 The centenarian smiles for the camera on her 100th birthday on Monday. (Photo by Phil Wheeler)

Margaret (Marge) Menier Krofft celebrated her 100th birthday with friends and family this week, and the Port Clinton centenarian had plenty to remember, from the joy of D-Day on main street to dancing at Gem Beach and sipping White Russians at Mon Ami Restaurant.

“My parents were Emalynn and Lee Layton, and they owned a Western Auto store,” said Marge. On Sept. 7, 1942 she married John Menier and, like many women of her generation, she saw her husband go off to war.

“John was stationed in England in the Medical Corp. He served honorably, then returned home and we raised our family,” said Marge, who remembers celebrating D-Day in the streets of Port Clinton from the back of a hay wagon.

Menier passed away Feb. 14, 1996. They had two sons and a daughter. The oldest son, Teddie, drowned in a cistern at age 3, and Ned passed away in 1995. Daughter Joy is Marge’s caregiver.

She has lived in the Port Clinton area since 1990.

“We went dancing at Gem Beach on Catawba Island, and to Mon Ami’s for drinks. I loved a good White Russian,” she said.

She married Paul Krofft in November 1998, a veteran of WW II.

“He was very active in the city,” said Marge. ”He served on many boards and on City Council. He became president of council in January 1974.”

Krofft passed away Oct. 2, 2014, but not before the couple traveled extensively to Florida, Arizona and Hawaii.

Marge said she has normal aches and pains, but still enjoys life, including celebrating her big day at home with family and friends.