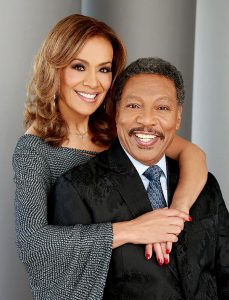 Named the First Couple of Pop and Soul, Marilyn McCoo and Bill Davis Jr. will perform at Hoover Auditorium at Lakeside Chautauqua on Sunday, Aug. 17.

Originally part of the group The 5th Dimension, they performed classics such as “Up, Up and Away,” “Aquarius/Let the Sunshine In” and “Worst That Could Happen.”

McCoo and Davis left the group in 1975 and found success on their own with their chart topping No. 1 record, You Don’t Have to be a Star (to Be in My Show). The record earned them their own Grammy and CBS television series. Billboard named them “The First Couple of Pop and Soul.”

The duo has had tremendous success through the years not only as recording artists but also as performers and authors. They have earned a total of seven Grammy Awards, and 15 Gold and three Platinum records.

Purchasing a Daily Chautauqua Pass includes admission to Lakeside Chautauqua and the show in Hoover Auditorium. A separate ‘ticket’ is not necessary to attend this lecture.

To park on the grounds, a Daily Auto Pass is required. Limited parking is available within the gates for $12.50 per day or the South Gate Parking Lot for $6.50 per day (complimentary shuttle service available). Parking at the nearby Danbury School Parking Lot is $2 per day (no shuttle service and limited parking dates based on school schedule). Purchase Chautauqua Passes in advance at www.lakesideohio.com/admission or upon entering the gates of Lakeside.

Also coming up this week at Lakeside Chautauqua:
Sunday, Aug. 25 – Rev. H. Daniel Drew is guest preacher: The Rev. H. Daniel Drew will serve as Lakeside’s guest preacher at the 10:30 a.m. Hoover Community Worship Service. His sermon, “Invitation to a Relationship,” is based on Matthew 4:18-25. The Rev. Drew is the Director of Travel Ministries for Educational Opportunity Tours, through which Lakeside traveled to the Holy Land in February 2018.

A resident of Cleveland Heights, he’s also a member of the Lakeside Chautauqua Board of Directors. For those who wish to attend worship, a complimentary Church Pass may be obtained between 7:30-10:30 a.m. on Sunday for guests and auto.

Tuesday-Thursday, Aug. 20-22 – Three-day photo workshop with David FitzSimmons: Join Sigma Pro photographer David FitzSimmons for a three-day photo workshop along the beautiful south shore of Lake Erie in Lakeside, exploring everything from landscapes and macro to wildflowers and wildlife. The workshop features both classroom seminars and hands-on field sessions that will explore local flora and fauna. To register, visit lakesideohio.com/photographyworkshop.

Tuesday, Aug. 20 — Helen Welch & Friends: Lakeside favorite Helen Welch returns with a few friends to Hoover Auditorium at 8:15 p.m. to shine the spotlight on the more recent song-writers from the decades after the ‘golden age.’ Welch, a native of England, is known for her musical theater roles and one-woman shows. She’s described as having the swing of Ella Fitzgerald and the warm alto tones of Karen Carpenter, combined with soul and a cheeky British sense of humor.

Wednesday, Aug. 21 – The Special Consensus: The Special Consensus is a four-person acoustic bluegrass band formed in 1975. They will perform traditional bluegrass standards at 8:15 p.m. at Hoover Auditorium. The band has toured internationally, appeared in concert with symphony orchestras and have brought informative presentations to schools around the world.

Friday, Aug. 23 – An Acoustic Evening with Al Stewart: Al Stewart rose to fame as part of the legendary British folk revival in the 1960s and 70s. Performing his own unique style of folk-rock songs, he combines his music with stories of characters and events from history at Hoover Auditorium at 8:15 p.m. Between 1967-2008, Stewart released 19 studio albums beginning with Bedsitter Images and ending with Sparks of Ancient Light. Known best for his No. 1 hit, “Year of the Cat,” Stewart’s career spans four decades and he is considered a key figure in British music.