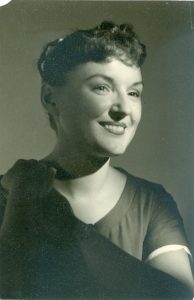 Mary Gaydos, 84, who by fun went by the moniker “Mary Mary quite contrary” died Thursday, Aug. 6, at Sage Park Special Care Center in Columbus after a brief illness. She was born Feb. 13, 1936 in Port Clinton, the daughter of George and Dorothy (Saunders) Gaydos of Marblehead.

Mary was a graduate of Danbury High School where she was active in school theatrics, which she continued in studies at Ohio University, earning a bachelor’s degree. Following graduation, she moved to New York City where she lived for over 50 years, often appearing in off-Broadway shows, on television, in commercials, industrial shows and other theatrical venues. She was a member of Actors Equity, screen writers guild, and American Federation of Television & radio artists.

In later years her love of literature led her to pursue a Masters of Library Science at Hunter College in NYC, becoming employed as a librarian for the city of New York. She was an avid member of C.G. Jung Foundation for Analytical Psychology in NYC. Raised Roman Catholic, she attended various services in the city.

Never married, she is survived by two brothers, Charles Gaydos of Marblehead and Gregory Gaydos of Honolulu, Hawaii, plus many devoted friends in NYC, Marblehead, and other places.

She was preceded in death by her parents, and most beloved brother, Georgie, whose death from cancer at age 2 greatly affected Mary.

A graveside service, open to family and friends will occur at 10 am on Friday, Aug. 21, at St. Joseph Catholic Cemetery in Marblehead. Online condolences may be expressed at www.walkerfuneralhomes.com. The Gerner-Wolf-Walker Funeral Home, 216 Washington Street, Port Clinton, Ohio assisted Mary’s family with arrangements.