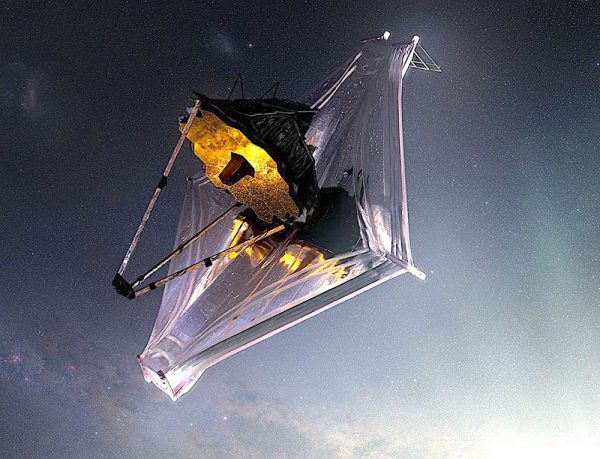 An artist’s rendering of the James Webb Space Telescope will be looking deep into the cosmos in the coming years. (NASA photo)

NASA’s new James Webb Space Telescope was launched recently on its space mission to peer deep into the cosmos over the coming years. If successful, it’ll do so with beryllium components manufactured in Ottawa County at the The Materion Beryllium & Composites facility in Elmore.

“We started working with NASA in the 1990’s where we developed a material to be a successful optic for the James Webb space telescope,” Keith Smith, Vice President of Nuclear & Science for Materion, told WTVG in Toledo.

That material is made of beryllium, a lightweight, gray metal. The James Webb’s large, iconic mirror is made of 18 hexagonal segments of beryllium, all of which were constructed at the Materion plant before being covered in a thin layer of gold. The engineering challenges posed by the telescope meant that NASA needed the best optics material available, and the beryllium that Materion mined in Utah fit the bill.

ESA, NASA and the Canadian Space Agency (CSA) have collaborated since 1996 on the definition of a successor to the Hubble Space Telescope (HST). The James Webb Space Telescope (JWST) is a general-purpose observatory with a large aperture telescope optimised for infrared observations and a suite of state-of-the-art astronomical instruments capable of addressing many outstanding issues in astronomy.

JWST’s investigations will cover questions such as: What did the early Universe look like? When did the first stars and galaxies emerge? How did the first galaxies evolve over time? What can we learn about dark matter and dark energy?

How and where do stars form? What determines how many of them form and their individual masses? How do stars die and how does their death impact the surrounding medium? Where and how do planetary systems form and evolve?

The Webb mission will explore every phase of cosmic history – from within our solar system to the most distant observable galaxies in the early universe.