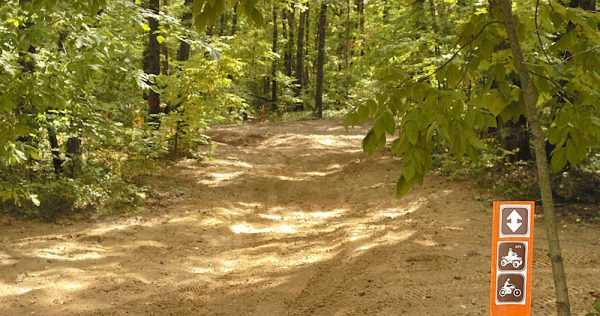 The only public all-terrain vehicle trails to be found in Northwest Ohio are at Maumee State Forest in the Swanton, Ohio area.

It can be difficult to find public trails in Ohio that allow riders and their all-terrain vehicles, all-season vehicles, mini-bikes and trail bikes. In Northwest Ohio, Maumee State Forest is not only open year-round, but offers eight miles of public all-purpose vehicle APV trails.

There is no fee for trail users, but they must have a valid APV registration from the Ohio Bureau of Motor Vehicles (BMV). Riders must wear the required safety gear, which includes helmets and eye protection. APVs, including utility vehicles (UTVs), may be up to 62 inches in width. Out-of-state registration is required for visitors from states without similar registration laws.

Maumee State Forest is one of four state forest properties that have APV areas, according to the Ohio Department of Natural Resources (ODNR). The other three are Pike and Richland Furnace in southern Ohio, and Perry in east-central Ohio.

Pike, Richland Furnace, and Perry state forests opened this week for APV trail use. They will close in the fall after the last day of regular deer-gun season.

The APV area at Maumee State Forest is open year-round, and snowmobile use is allowed when conditions permit. The APV areas are maintained by the ODNR Division of Forestry.

The Pike State Forest APV area is closed until noon on April 11 to allow for this week’s Thunder in the Hills Turkey Hunt, a special event designed for disabled hunters.

Funds from each APV registration are put in the State Recreational Vehicle Fund and used by the ODNR Division of Forestry for projects that directly support the state’s APV areas.
Additionally, spark arrestors and mufflers must be compliant with industry-standard sound limitations.