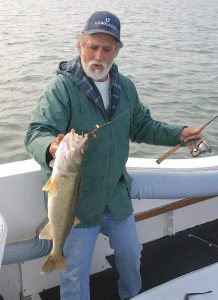 The mayflies are coming, and Lake Erie anglers have been beating the hatching bugs and catching limits of walleye with traditional drift-and-cast fishing tactics.

Over the last week, the best waters to drift for walleye were along the Canadian line by Middle Sister Island. As of Sunday, the fish were still there, as well as four miles west of Rattlesnake Island.

Our methods have changed a little bit because of the mayflies that are starting to appear. Most of the walleye that have been being caught have been more towards the bottom of the lake.

Anglers have been casting 1-ounce weights and heavier on the small spinner rigs, and gold and silver blades are still walleye favorites. The heavier barrel sinkers will keep the weapon-style spinner rigs near the bottom of the lake. Even though the winds have been light, limit catches were being being taken daily. It has just been taking a little longer to catch the fish you want to keep.

The walleye are definitely starting to feed on the mayfly larvae emerging from the lake bottom and rising to the surface to hatch. We will probably be seeing the big hatches of mayflies soon all along the shoreline.

Trollers have enjoyed consistent walleye catches, as well. Tru-Trip diving planers matched with spoons and set 25 to 40 feet back have worked the best. The speeds that have been hooking the most walleye have been 1.9 to 2.1 miles per hour.

Hot spots for trolling include West Reef on the west side of North Bass Island, north of Kelley’s Island and along the south side of Middle Island on the Canadian border.

Catfish continue to be one of the most popular species of fish to catch right now. The amount of catfish being taken out of the Sandusky Bay is phenomenal. We have been seeing some of the largest catfish ever at Bay’s Edge Fish Cleaning. The best baits for channel catfish continue to be chicken livers and raw shrimp.

We have not heard of many people that have been fishing for smallmouth bass. The best smallmouth fishing has been in the deeper edges of the rock piles in about 25 to 27 feet of water.

We have no reports on Lake Erie yellow perch. We have not heard of anyone that has been fishing for them yet, or have seen perch boats anchored in the usual areas, a major disappointment, especially for small boat anglers.

With the mayfly hatches starting all along the Lake Erie shorlines, expect a lot of the fishing charters to head for the deeper waters east of Kelleys Island and troll small spoons. We will monitor the hatch this week for next week’s fishing report. Until then, stay safe, be careful out on the lake and, as always, keep a tight line!