McCarthy named the Player of the Week 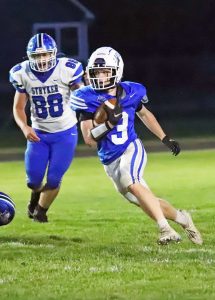 Cade McCarthy has had a very impressive season for the Danbury Lakers.

He’s been one of the best players on the team, and he’s been a threat both running the ball and catching the ball out of the backfield.

For his efforts last week in Danbury’s 14-0 win over Stryker, McCarthy has been named The Beacon’s Player of the Week. On Friday, McCarthy carried the ball 28 times for 149 yards and a touchdown. His 14-yard touchdown run in the second quarter gave the Lakers the lead for good.

The win put Danbury at 2-3 overall, but 1-0 in the Northern 8 Football Conference.

“It felt really important because we wanted to make sure we could start winning games, we wanted to have a chance at a winning season, and this is what we needed to do,” said McCarthy.

After quarterback Jacob Mischler injured his ankle in the second quarter, McCarthy took over his duties and the offense operated out of the Wildcat formation.

It was a much-needed win after a slow start for the Lakers.

“It’s been rough with how we had a break due to Covid-19 and we had some injuries,” said McCarthy. “We’re already a small team. This seems to put it back on track.

McCarthy credited his line, a unit that consists of Layne Blessing, Connor McCarthy and D.J. Webster. Wyatt McCaskey was a lineman, too, but he got moved to wide receiver for the game against Stryker.

“As long as we keep controlling the line of scrimmage and get good push, I think we’ll be fine for these next few weeks,” McCarthy said, “and we’re still in line to win the conference.”