McCarthy’s effort not enough in loss to Stryker

Danbury High School quarterback Jacob Mischler gets ready to take a snap against Stryker High School in the opening game of the season. (Photo by Ellie Mora)

STRYKER — Danbury running back Cade McCarthy had a great performance to open the season, but the Lakers fell short, 28-22, against Stryker.

McCarthy ran 19 times for 181 yards and a touchdown.

The Panthers (1-0, 1-0 Northern 8 Football Conference) trailed 22-20 in the third quarter before scoring a touchdown to take the lead for good. No points were scored in the fourth quarter.

Stryker, which is located 101 miles west of Marblehead in Williams County, led 14-8 at halftime and the teams traded touchdowns in the third quarter with each scoring 14 points.

“It didn’t go exactly as we would’ve wanted it to, but we both had big stops in the first quarter,” said Danbury coach Keith Mora. “We had a fourth-down stand at our own 5-yard-line. We got down to their 2, and we didn’t get in.

“It was a back-and-forth game at that point. We had a turnover just before halftime that cost us. We came out in the second half and scored. We told the guys that it’s about the little things. There were a number of factors where if things go differently, it could’ve gone our way. At the end of the day, we have to take care of the little things.

“Stryker turned the ball over on downs two or three times. It’s the offense’s job to score when they have those opportunities. We have to go score a touchdown. If we do those things, we’re having a different conversation. The defense put us in a position to take the game away, and it takes both sides to win a game. It’s something we have to continue to address.” 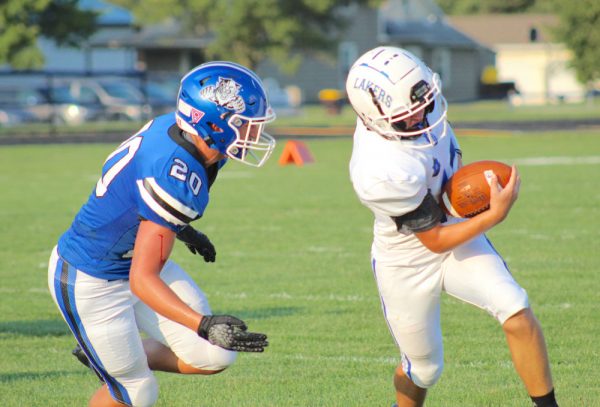 Mora had high praise for Stryker.

“That’s a good football team. The one thing we saw from them, this team was getting better and better each week. Hats off to them. They were very ready, and they’re a much-improved football team,” he said. “Half the teams in Ohio wake up 0-1. Let’s not have that be what makes or breaks our season. We still have goals that we want to achieve.”

“He had a solid night. We’re asking him to do a lot of things and be on the field the entire night. He finished with 19 carries, he was a workhorse for us,” said Mora. “I think our first offensive play, he had a 43-yard carry. Just really consistent, he knows the kind of work that he has to put in for the entire game.”

Danbury (0-1, 0-1) hosts Britton Deerfield, a small school out of southeastern Michigan on Thursday at 7 p.m.

“I don’t know a whole lot about them,. It’s their first year playing 8-man football. I think they have a JV team, considerably larger than us,” said Mora.