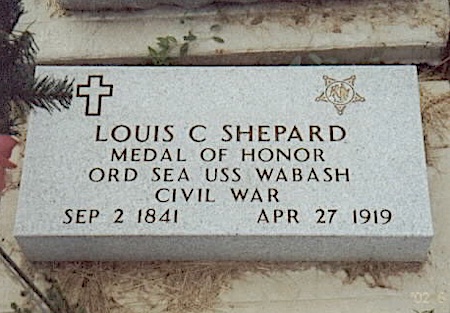 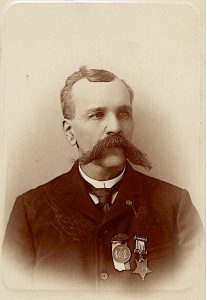 Hidden among the graves in the Lakeview Cemetery on West Third Street in Port Clinton is the tombstone of one of Ohio’s 331 Medal of Honor recipients, Lewis Capet Shepard. Born in Ashtabula County, Ohio, Shepard moved to Danbury Township after the Civil War ended, and died there at the age of 77.

Shepard (Sept. 2, 1841 – April 27, 1919) was a Union Navy sailor during the American Civil War who received the Medal of Honor for his actions at the Second Battle of Fort Fisher. Shepard was just 23 years old at the time. Due to a Navy clerical error, his citation reads Louis Shepard.

According to records, his first name was spelled Lewis.

Shepard enlisted as a private in Company I, of the 19th Ohio Infantry, mustering in on April 27, 1861, and he participated in the Battle of Rich Mountain.Shepard reenlisted in the 11th Independent Battery, New York Light Artillery on Sept. 18, 1861, and on Aug. 26, 1862, he was captured with 19 other soldiers at the Second Battle of Bull Run, also known as Second Manassas.

After his release, he was promoted to Corporal. Shepard also saw action at Chancellorsville, Gettysburg and the Battle of Mine Run.

Corporal Shepard was discharged, and petitioned the Army for a transfer to the Navy, enlisting on April 25, 1864, as an ordinary seaman. He served aboard the USS Allegheny, USS Wabash, USS Commodore Perry, and the USS Constellation.

“During his service aboard the USS  Wabash, he participated in the landing party that assaulted Fort Fisher in Wilmington, North Carolina in January 1865,” reads Shepard’s citation. “He advanced gallantly through severe enemy fire, while armed only with a revolver and cutlass, which made it impossible to return the fire at that range.

“Shepard succeeded in not only reaching the angle of the fort, but in being one of the few to enter it. When the rest of the men to his rear were forced to retreat due to devastating fire, Shepard was forced to withdraw and seek the shelter of one of the mounds near the stockade. Shepard then succeeded in regaining the safety of his ship.”

The Medal of Honor was first awarded in the American Civil War. President Abraham Lincoln signed a bill containing a provision for the medal for the Navy on Dec. 21, 1861. It was “to be bestowed upon such petty officers, seamen, landsmen, and Marines as shall most distinguish themselves by their gallantry and other seamanlike qualities during the present war.”

The presentation of the Medal of Honor was later expanded to include all branches of the military. According to the Congressional Medal of Honor Society, there have been 3,505 Medal of Honor recipients since the decoration’s inception in 1861.