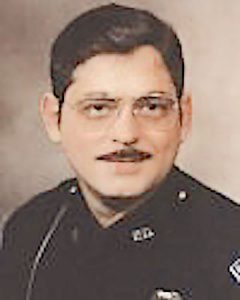 Sgt. Robert B. Rigoni of the Port Clinton Police Department is the only member of the local law enforcement agency to die in the line of duty. On Wednesday, May 15, law enforcement officers and the community will honor him during National Peace Officer Memorial Day by renaming a city street in his honor.

Sgt. Rigoni Memorial Drive will run east from the intersection of 6th and Fulton streets, past the entrance to Magruder Hospital’s Emergency Room Entrance, and adjacent to the Life Flight landing pad.

Sgt. Rigoni, a veteran pilot and police officer, and three EMT responders died on Dec. 9, 1983 when their airplane crashed on Lake Erie just south of South Bass Island on a cold, foggy evening. They were en route to providing emergency medical assistance to a police chief on a neighboring island who was suffering a heart attack.

Also killed in the accident were Deputy Sheriff Bruce Mettler of the Ottawa County Sheriff’s Office, and Michael Sweeney and Duane Dress of the Put-in-Bay Police Department. Sgt. Rigoni had served with the Port Clinton Police Department for nine years.

His son, Billy Rigoni, owns the popular Northern Exposure Gallery & Candle Company in Port Clinton with his wife, Kelly. He was only 10 years old when the accident happened, and fondly remembers his hard-working adventurous father.

“My dad spent a lot of time in the air and was a wonderful pilot,” said Rigoni. “He had a lot of businesses, from being a commercial pilot to a police officer, flying banners with his private airplane and various commercial businesses.

“I remember my time flying with him, even at a young age. He would take folks over to Put-in-Bay, and let me run around the island all day with a pocket full of quarters while he attended to business. I was only eight or nine, but he trusted me to stay out of trouble.”

Port Clinton officials gave a special thanks to the Board of Directors and administration of H.B. Magruder Hospital for their assistance with the memorial dedication. The street of honor seemed most appropriate, they said, as it is the primary route for those in the community seeking emergency medical care.