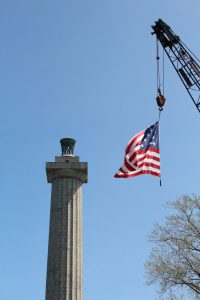 Park Rangers, volunteers, special guests, and the Put-in-Bay community honored the fallen at Perry’s Victory and International Peace Memorial during a Memorial Day Service on Monday, May 30. The Memorial column opened following the ceremony.

“After two years of marking this solemn occasion with a simple wreath laying, we will once again all come together on Memorial Day to honor the men who died in the Battle of Lake Erie and all service members who lost their lives in service to our country,” said Superintendent Barbara Rowles.

The service began with a procession from the Visitor Center to the Memorial Plaza and a brief service. A wreath was placed in the Memorial’s rotunda over the spot marking the location where the three American and three British naval officers who died in the Battle of Lake Erie are interred together.