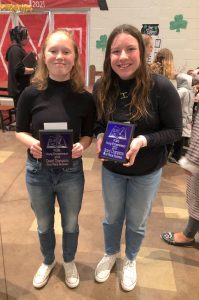 The Young Entrepreneurs Club members at Port Clinton Middle School competed in its annual Shark Tank competition recently, battling it out by pitching their ideas for why their business idea was the best for Port Clinton. After a lengthy deliberation from the five Shark Tank judges, there were a few businesses that rose to the top.

Awarded the Best Overall Business and Grand Champion was “Explore Your Appetite,” created by Halle Puffenberger and Abigail Johnson. The dynamic duo had the most unique idea, and did not miss a single beat in the Shark Tank. They were well researched, prepared, synchronous and looked very professional.

Addisyn Mooney and Carolynn Below stole the judge’s hearts with their clever commercial, never before seen hands-on demonstration, and speaking skills to earn Runners-Up Award with their business of “Care Bear Care!”

In third place was Emma Knecht and Marissa Frohne with their entrepreneurial venture, “Wellness on Wheels.” This pair remained gritty throughout the years and wowed the Shark Tank judges with their preparation, enthusiasm and knowledge of the microbiome.