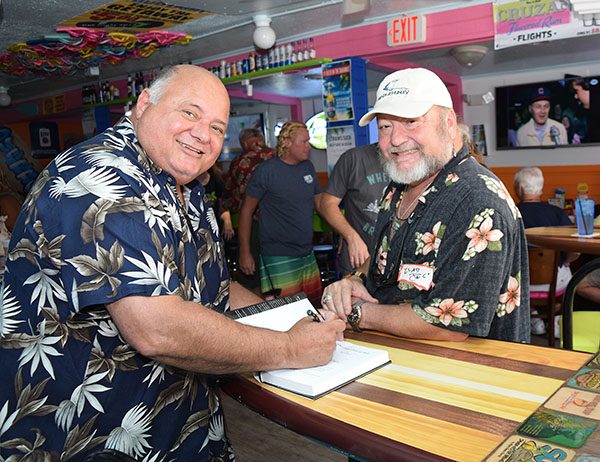 Famed island balladeer and comedian Mike “Mad Dog” Adams has been immortalized in Bob Adamov’s latest book, “The Other Side of Hell,” prompting both of them to sign books last week at the Overboard Bar & Grill in Port Clinton. (Photo by D’Arcy Egan)

The Roundhouse Bar has been a fixture on the center of Delaware Street in Put-in-Bay since 1873, and for the last 40 years, Mike “Mad Dog” Adams has been the master of ceremonies, entertaining the crowds all summer long.

“I have loved spending my summers at The Roundhouse for all that time,” said Adams. “They give me the creative license to work on my act, my songs, my comedy every year. It just fits my personality as an entertainer.”

That’s saying some about the burly, bearded guitarist who has performed all over the world in an amazing array of venues, and began his musical career playing a B flat cornet.

Adams, 63, vividly remembers when he decided to become a bar singer. He delivered the Cleveland Press while growing up in Cleveland, and in a circulation contest won a pair of tickets to see the Ice Capades at the Cleveland Arena. His mother made his father take him to the show.

There was a rowdy smoke-filled bar in a corner of the Cleveland Arena building. The glaring music, flashing lights, go-go dancers and an organist grabbed the youngster’s attention.

“I talked my dad into going in. Everyone was having a great time and I was enraptured by the smells, sounds and sights, and all of the happy people,” said Adams.

His dad told him not to tell his mother about that visit, but the Adams couldn’t forget the atmosphere.
“At 14, I finally got a guitar and set my sights on being a rock and roller. I carried that guitar everywhere.”

Just out of high school, Adams started hustling for gigs while he worked as a laborer, picked tomatoes and struggled to be a salesman while working on his music. He started making money playing all around Cleveland, having fun and drinking for free most every day of the week.

“I wasn’t making bad money, so I seriously started working on my act. I had a southern rock band, went through a folk singer stage and did some country music,” he said. “In reality, I worked on becoming an all-around entertainer, putting together a comedy routine, and performed everywhere I could. I’ve done everything from corporate shows to amusement parks and comedy clubs.”

Adams climbed on The Roundhouse Bar stage 40 years ago, not realizing at the time it was where he would spend every summer.

“I had a lot of fans and made a lot of friends over the years,” said Adams. “The rest of the year I’d be on the road in North America and the Carribean. I’ve performed for six weeks in Canada’s British Columbia and six weeks in the Cayman Islands. I have four music albums and two comedy albums, have done shows in Italy and Mexico, wrote a lot of my own music and polished some pretty crazy comedy routines.”

He has written and performed radio commercials and currently radio programs on WPIB and WPCR, www.portclintonradio.com & www.putinbayradio.com, a pair of online island radio stations.

He has opened concerts for such legendary performers as Johnny Cash, Alabama, Loretta Lynn, Charlie Daniels, Starship and Jerry Lee Lewis. He has appeared on Comedy Central, The Nashville Network, The Dr. Demento Show, Sunday Funnies, Nightshift and local television and radio shows throughout the U.S.

Famed comedian Bob Saget was good friend before Saget hit it big on television, and he wanted Adams to share a Hollywood apartment so both could try to break into the big time in Tinsel Town. Adams had two daughters — Shauna and Kristen — and passed on the offer.

“At the time, he asked me if wanted to work in bars all of my life,” said Adams. “Well yeah, I did! Bob just never had a place like The Roundhouse Bar to spend the summer.”

There is a long list of Put-in-Bay regulars who perform throughout the summer, from Adams to Ray Fogg, Bob Gatewood & The Calabash Band and the recently-retired Pat Dailey.

“We’re all spokes in the wheel that make the island go around and around. We may all be narcissists, egotists and somewhat sensitive people, but we’re here to entertain the crowds and have fun,” he said.