Millions of cicadas to ‘buzz’ again after 17 years 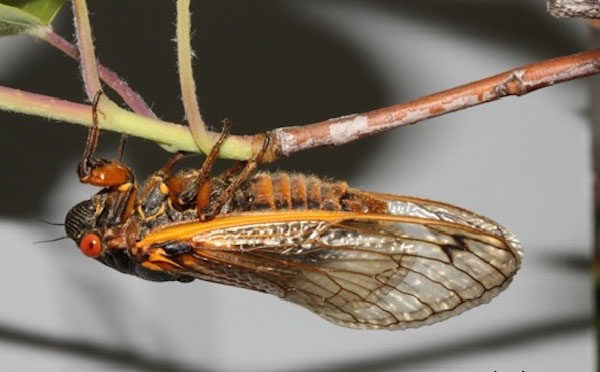 After spending 17 years burrowed underground, cicadas will noisily emerge around Ohio in late April and early May.

Get ready! We’re about to be bombarded by a swarm of very noisy, very large bugs. A type of cicada that only comes out every 17 year’s is about to emerge around The Buckeye State, reports the experts from The Ohio State University Extension Agency.

The Brood X Cicadas (periodical cicadas) have burrowed underground for almost two decades and will make their way to the surface late April into early May. They won’t cause any damage to your home, gardens, crops, or animals.

They are a bonus for fish, birds and other wildlife that feed on bugs, and cicadas are very big, very high protein bugs. Fishermen have been known to use cicadas for bait, but they’re so plentiful during their short, late spring appearance that pond and lake fishing often slumps badly as critters gorge on cicadas.

Cicadas won’t harm mature trees, but you should consider protecting newly-planted trees by wrapping them with a mesh net.

The noise Brood X cicadas make is a loud and distinct “buzzing” noise. In large groups, the sound can reach as high as 100 decibels, which is equivalent to a motorcycle, low-flying plane or lawn mower starting. The sound of a group of cicadas is often compared to the sound of electricity.

OSU Extension expects to see the largest concentrations of cicadas in central and southwest Ohio. Brood X is one of the largest and most broadly distributed groups of periodical cicadas, stretching from Georgia to New York and reaching as far west as the Mississippi River.

The Buckeye State periodically “enjoys” the appearance of four different broods of 17-year cicadas and one brood of the 13-year cicadas.