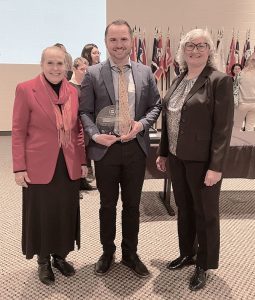 “This award reflects the teamwork of our board staff and volunteer board members. We could have not accomplished this without local collaboration and partnerships with law enforcement, behavioral health agencies, county commissioners and city officials in the (Mental Health and Recovery Services Board of the Seneca, Ottawa, Sandusky and Wyandot) four-county district,” Handru said.

Ottawa County officially merged with the Mental Health Board of Seneca, Sandusky and Wyandot counties last June, leaving behind a partnership with Erie County. Ottawa County Commissioner Mark Stahl has said the new four-county board will significantly increase opportunities for Ottawa County.

The Ohio Department of Mental Health and Addiction Services approved the split.

“We are looking at the local services that already exist here, enhance them, maybe expand them in the future,” Handru said. “We are really grateful that it seems like the four counties kind of match each other’s culture and values. Our goal is to enhance the quality of services, and to have local collaborations with local agencies, providers and public officials.

Local levy funds raised from residents’ property taxes will stay to cover services for our county residents, which was not happening in the past,” Handru said earlier this year. “We believe it’s around $900,000 of additional funds. We are very proud of that and I think residents should be very proud of that.”