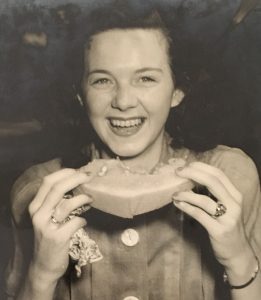 Miriam Elizabeth Somers (“Mim”) died Oct. 4 in Chagrin Falls, where she had been living with her daughter, Mary, and Mary’s husband, Paul, for the last 18 months.

Mim graduated from The College of Mount St. Joseph, Cincinnati, (now Mount St. Joseph University) in 1941 with her sister Mary Julia (“Julie”). Their father’s sister, Sister Maria Corona, was dean of the college and arranged for them to attend, as it was not customary for women to attend college at that time. Upon graduation from college, she was the embodiment of “Rosie the Riveter,” working during World War II at the B. F. Goodrich Company factory in Akron, in the fuel-cell division. She could tell you the type of fuel cell used in every World War II airplane. When the war ended, she worked as a legal secretary for a group of attorneys in Akron. It was on a trip to Put-in-Bay that she met Tom Gabel. They married and quickly found themselves with four children. After Tom’s death, she began substitute teaching at Port Clinton High School and did so for many years. In 1999 she reacquainted herself with a good friend, Murray Somers. They married and enjoyed almost 10 years together. 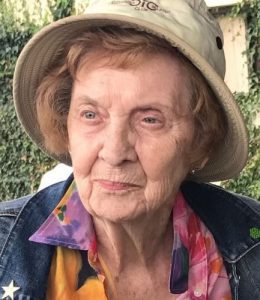 A Mass of Christian Burial will be held on Saturday, Oct. 9, at 1 p.m. at Immaculate Conception Church in Port Clinton. Rev. Jonathan Wight will officiate. Burial will be at Catawba Island Township Cemetery. There will be no visitation, in accordance with Mim’s wishes. Online condolences may be shared with the family at www.neideckercrosserpriesman.com.

The family kindly requests no flowers or plants. In the spirit of Mim, we ask everyone who knew her to please show an act of kindness to a stranger, as she was known for picking up a conversation with or helping someone she did not know.

The family would like to thank caregivers Eric Eiermann, Kathy Gambatesa, and Melanie Tusick, for their exceptional care and love shown to Mim in her last months of life. Memorials in Mim’s name may be given to Immaculate Conception Church, 414 Madison Street, Port Clinton, OH 43452; Hospice of the Western Reserve, 17876 St. Clair Avenue, Cleveland, OH 44110; or Juvenile Diabetes Research Foundation, PO Box 37920, Boone, IA 50037-0920.