Miss Kitty and the Litter featured Saturday on MOM Stage 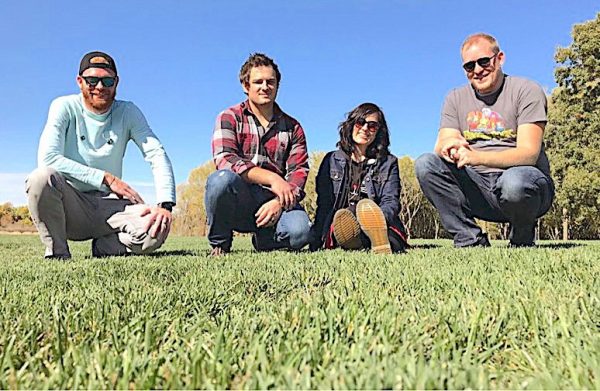 Miss Kitty and the Litter is the featured band on the Music on Madison Stage in downtown Port Clinton on Saturday, Aug. 6 at 8 p.m.

The Music on Madison Stage in downtown Port Clinton has been a dream come true for Miss Kitty and the Litter, a local foursome who got together to entertain a fan base that continues to grow around the Port Clinton area.

They’ll be back on the Music on Madison Stage in downtown Port Clinton on Saturday, Aug. 6 at 8 p.m., their favorite local venue for making music.

“We’ve played on the MOM Stage and have enjoyed it so much,” said lead singer Jaclyn Zajac. “It’s always fun for us to be on a big stage like that, and to be loud!” she exclaimed.

“The MOM Stage has a very good vibe for us, and for our audiences. We’ve definitely been spoiled by it, especially since we don’t have to travel very far from home to be on it.”

For all who are wondering, Miss Kitty and the Litter took their name from a cute basket of cuddly kittens, not a feline waste product. They felt it has a familiar ring to it, like Gladys Knight the the Pips, and what is cuter than a gaggle of little kittens?

“I thought it was a great name for the band,” said Jaclyn, who recently married band member Rob Zajac, a drummer who is also an eighth grade math and STEM teacher in the Oak Harbor Schools, which is where drummer Jonathon Head is a band director. Spencer Eller of Marblehead is on guitar, and vocals, and works at The Chapel in Port Clinton.

Jaclyn is also a stylist at Little Shop of Hair in Port Clinton’s Sutton Center.

The band formed in 2014, and considers itself an acoustic and electric group. They say fans tell them they’re a bit like the Beach Boys and Tom Petty, with plenty of ‘90s alternative music.

“A large part of our success has been the fabulous fan base we’ve developed in this area,” said Jaclyn. “We enjoy bringing them the pop tunes of the 1960s to the electric sounds of the ‘80s, as well as fusion acoustic rock.”

Miss Kitty and the Litter get the crowds involved with their collection of sing-a-long songs, such as The Proclaimers’ “I’m Gonna Be (500 Miles)” at their shows.

“We like to do the songs where everyone knows the chorus,” Rob Zajac said.

The name “Miss Kitty and the Litter” is one they think will stick in people’s minds, a goal they have for each performance.

To learn more about Miss Kitty and the Litter, visit their Facebook page: www.facebook.com/misskittyandthelitter.