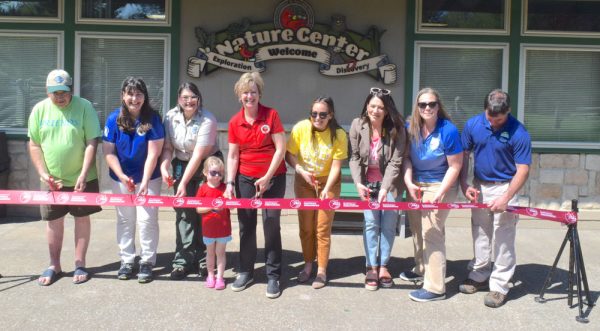 Director Mary Mertz of the Ohio Department of Natural Resources has a lot of help on Friday as a few pairs of scissors were ready to cut the red ribbon and dedicate the new Nature Center at East Harbor State Park in Marblehead. (Photo by D’Arcy Patrick Egan)

Just in time for the summer season, a bright, spacious Nature Center at East Harbor State Park was dedicated by Director Mary Mertz of the Ohio Department of Natural Resource (ODNR) on Friday morning. Providing a wealth of hands-on wildlife identification displays and even some cool drinks, ice and snacks from the Camp Store next door that is a part of renovated facility.

“Our nature centers are a great place for people to learn about the natural world, see Ohio wildlife up close, and connect with our park naturalists,” said Mertz. “We’re excited for guests to enjoy this latest in a series of nature center improvements happening at several Ohio State Parks.”

Park rangers were out in big numbers for the dedication, and were thoroughly impressed with the interactive displays that also attracted campers at East Harbor State Park and promised to be a hit with day trippers who visit the spacious state park, one of the largest in Ohio. 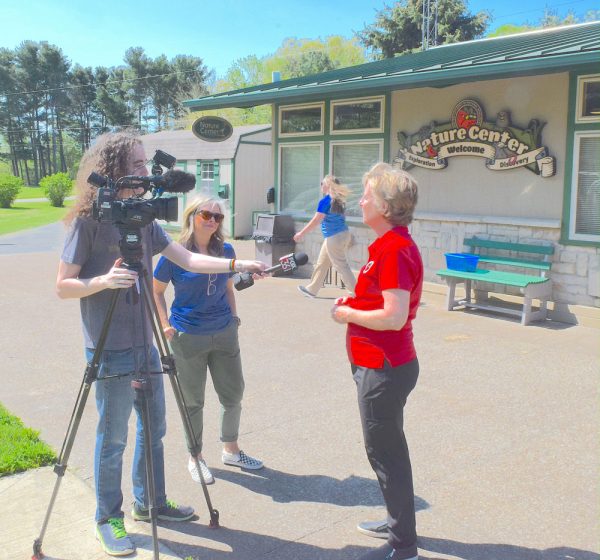 The family campground at East Harbor is the largest in the Ohio State Park system. It is conveniently located a short drive or bike ride from a family-friendly swimming beach on Lake Erie. Pets are permitted on all sites.

Campers may rent bikes or borrow games and sporting equipment at the Camp Store.

The various displays at the Nature Center are highlighted by the colorful, multi-themed displays for information on boating, fishing, hunting and the wealth of wildlife that can be found in East Harbor State Park. The wildlife found roaming the park includes white-tailed that are not camera shy, snakes, turtles and flocks of waterfowl, including a plethora pdf Canada geese. East Harbor State Park has a large swimming beach on Lake Erie, hiking trails and quality boat ramps. 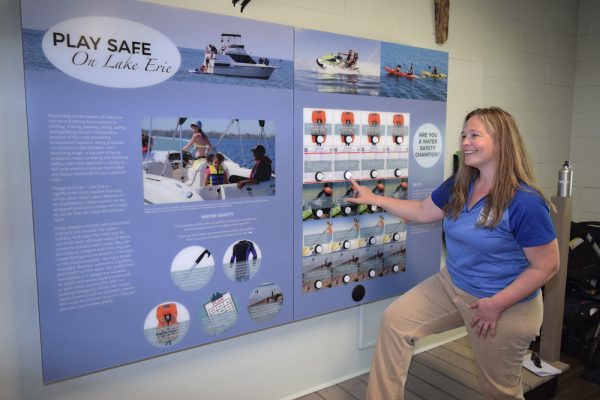 Director Mary Mertz of the Ohio Department of Natural Resources explains the many modern features of the new Nature Center at East Harbor State Park in Marblehead to the media. (Photo by D’Arcy Patrick Egan)

A large, shallow body of water, East Harbor is prime water for winter fishermen. It freezes earlier than the big waters of Lake Erie, luring crowds of bluegill anglers.

East Harbor is unique in that its new Lake Erie Water Trails offer access with canoes and kayaks, even when the winds are blowing. Big water boats can motor out of the East Harbor Channel and to Lake Erie. Fishing for largemouth bass, bluegills and catfish is popular in East Harbor, and the Lake Erie walleye fishing this spring has been spectacular, despite the spring winds.

Director Mertz, an avid angler, said that the ODNR decided a couple of years ago to launch an initiative for improving and updating more than a dozen state park Nature Centers to provide campers and sportsmen with a wide variety of nature-based experiences. Now that East Harbor State Park has completed its renovation, ribbon cuttings in the near future will include Alum Creek on June 11, and Hueston Woods State Park on June 15.