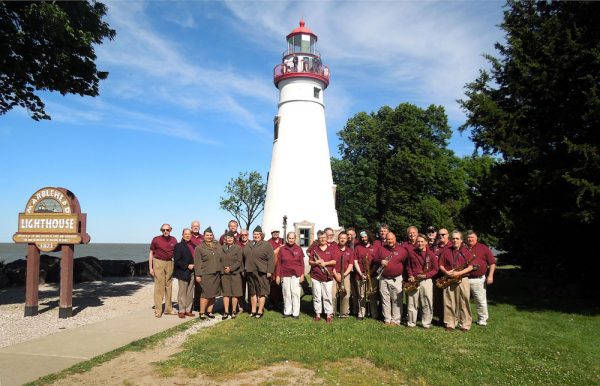 The Moonlight Serenaders Big Band will be performing a full concert at the Marblehead Lighthouse on Saturday, Aug. 6 at 6 p.m. in honor of National Coast Guard week and its 233rd anniversary.

The Lake Erie winds blowing into Marblehead were relentless the entire June day, but the featured performance started on time with the band’s theme song, Moonlight Serenade. A huge audience assembled throughout the park to hear and see the band perform some of the most memorable big band standards. The enthusiastic audience included dedicated concert-goers aging from eight to eighty years old.

While many recognized the famous Glenn Miller tunes like String of Pearls, Stompin’ at The Savoy and of course In the Mood, the younger audiences in attendance were hearing this big band music for the very first time.

The band’s Serenader Sisters in full military uniform of the 1940’s performed Boogie Woogie Bugle Boy, Sincerely, Apple Blossom Time and Rum & Coca Cola in true style reminiscent of The Andrew Sisters or the McGuire Sisters. The velvet voice of Don Howdyshell was featured in his solo-performances of Tangerine, The Summer Wind and God Bless the USA.

The standing ovation from the appreciative audience after the encore was indicative of how much everyone enjoyed the music in the beautiful surroundings of the Marblehead State Park. Those who were not in attendance in June are being given an opportunity to hear a military salute performance on Saturday, Aug. 6 at 6 p.m. in honor of National Coast Guard week and its 233rd anniversary.