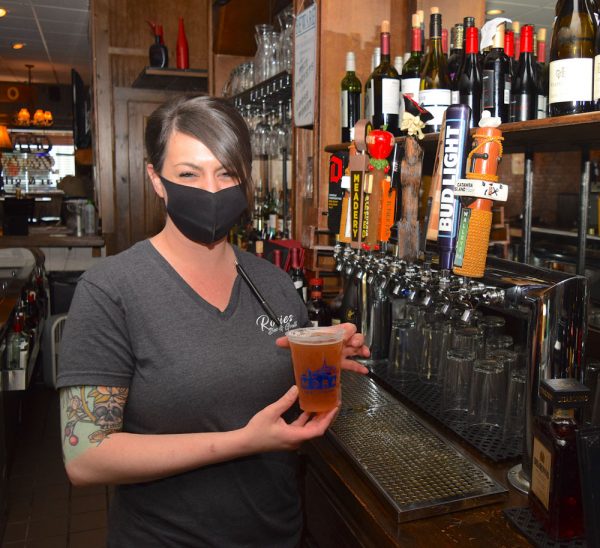 Alex the bartender fills a MORA Cup with beer at Rosie’s Bar & Grill on Madison Street in Port Clinton, allowing its owner to carry it around the open air MORA Zone in the downtown area. (Photo by D’Arcy Patrick Egan)

It’s easy to gauge the success of the MORA rule in Port Clinton, which defines the Main Street Outdoor Refreshment Area. Since approved by Port Clinton City Council in July 2019, MORA is the designated public area in the downtown district where alcoholic beverages can legally be purchased and consumed outdoors.

When the establishments have to pay 30 cents per MORA cup, which are needed to roam downtown if a cup has alcohol in it, that can add up. Main Street Port Clinton had ordered 80,000 cups last year, and has already placed its MORA order for 2021.

“We’re getting 100,000 MORA cups this year, and if we have to order more during summer, that’s just great,” said Brittani Blevins of Main Street Port Clinton and the Port Clinton Chamber of Commerce.

Main Street Port Clinton gets 3 cents per cup for handling the orders and shipping, which isn’t a lot, but probably enough to buy some benches or flowerpots for the Meals on Madison (M.O.M.) Area.

Now that the 100 block of Madison Street has been blocked by huge boulders for the “vacation season,” and its large stage will take shape later this week, it is becoming the Music on Madison (MOM) Entertainment Stage for the summer of 2021.

“We have huge expectations for Madison Street this summer,” said Mayor Mike Snider. “Everyone saw what happened last year when we had no advance planning and a few bands playing. People began to head downtown to eat, drink, shop and listen to music.

“Now, because of a lot for advance planning last fall and winter, there will be an amazing lineup of music all summer, and it starts on Friday, May 28 to kick off Memorial Weekend.”

The MOM Entertainment Stage initially had about 45 bands booked on Thursday though Saturday, and that continues to expand. A Tuesday night stage sponsor is in the works, and Sundays may feature jazz, classics and other sounds.

The Ida Rupp Public Library is working on Wednesday morning events for the younger set, including Story Time for Kids.