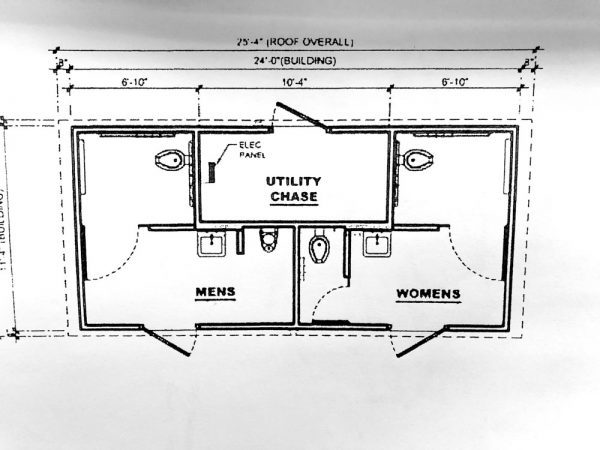 Plans for a new public restroom at Waterworks Park in downtown Port Clinton are done, and the $190,000 facility could be ready by the end of October.

Waterworks Park has enjoyed an amazing transformation in recent years.

The Port Clinton Lighthouse and Andy Sacksteder’s sculpture, The Lightkeeper, are drawing crowds. The brand new Portage River Walkway is getting rave reviews. Crowds have flocked to the well-groomed Lake Erie beach and the various festivals.

But the one feature that would make Waterworks Park a more comfortable place to visit has finally graduated from the drawing board stage — a state of the art restroom facility.

“It’s going to cost $190,000, and we’re working to have it open by the end of October,” said former Port Clinton mayor Debbie Hymore-tester of the Friends of the Port Clinton Parks. “It will be somewhat like the restroom facility at Lakeview Park, but much improved.”

The comfort station is much needed for visitors and residents enjoying the Lake Erie park, and far more attractive than portable restrooms rented for the major park events.

The Friends of the Port Clinton Parks began its drive for funding for the restroom facility in May 2021, with Hymore-tester, Bill Yuhaz and Kathy Buckingham of the parks group leading the charge. Doug Focht is the contractor, and many other area contractors have agreed to donate their time to constructing the restrooms.

The friends group and the Port Clinton Lighthouse Conservancy are providing the needed materials.

“Various groups have been raising funds for the new restroom, including Beck Supply and its FriendShip Stores, Cindy Bolte, Stensen Foundation and many local businesses and members of the community,” said Hymore-tester. “We’re gratified by the support of Ray Brooks and Gill Construction, who is putting in the pilings.”

The cinder block building will have a white facing and green roof, with two stalls for women and one stall and a urinal for men.

Like the restroom at Lakeview Park, just to the east on Perry Street, the Waterworks Park restroom will be open from May through October and managed by the City of Port Clinton. The restroom there has made for a very busy park that hosts social events ranging from the city’s Easter Egg Hunt to Arts in the Park, which had record crowds recently for its annual show.