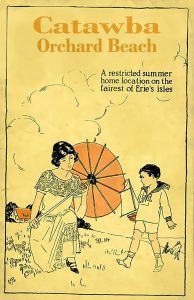 CATAWBA ISLAND — Continuing with its plan to share historical highlights about specific neighborhoods on Catawba Island, the Catawba Museum at Union Chapel has planned a “West Beaches Christmas in July Celebration” on Friday, July 22.

“We have completed a new exhibit honoring the Byrneal, Orchard, and Kenykirk beach communities along West Catawba Road,” said David Wonnell, President of the Catawba Island Historical Society, which operates the museum. The museum is not usually open on Fridays, but it will operate from 4-7 p.m. this Friday to officially launch the West Beaches Christmas in July display.

Residents from those neighborhoods are invited to stop by to enjoy holiday cookies, punch and a take nostalgic sleigh ride down memory lane.

In the early 1920’s the adopted granddaughter of Catawba entrepreneur, Clark Neal, married a doctor named Byrne. They developed an orchard they owned into an exclusive private colony with access to two beaches. The project was marketed using descriptors such as unique, highest class, carefully selected families, and roomy lots. A combination of their last names led to calling it Byrneal Beach.

Following a similar model, Orchard Beach was developed from property extensively planted with Peach trees. It celebrates the 100th anniversary of its founding this summer.

It was, however, the donation of approximately three acres of land by Mrs. E. J. Blade in the late 1940’s that spurred growth of the community’s broad popularity. The Blade gift was used for park space, a large playground site, and a lagoon for boat slips.

Just after World War II, the small northernmost parcel of the three lakefront communities was transformed into Kenykirk Beach. It had been owned by “Charlie” Norgard, an electrical inspector for Ottawa County. When the cottage community was developed the names of Charlie’s two grandsons, Keny and Kirk, were combined to label it.

“Homes in these neighborhoods are usually passed from one generation to the next,” said Wonnell. “Current owners often stop by to share their recollections of summers on the lake when the houses belonged to their parents or grandparents. At the Catawba Museum we are pleased to foster community pride in the Island by helping to keep those memories alive.”

More detail about the founding and growth of Catawba’s west beach communities is incorporated into the new museum display. General information about the museum and all its offerings is available at www.catawbaislandhistoricalsociety.com or by calling 419-967-5363.