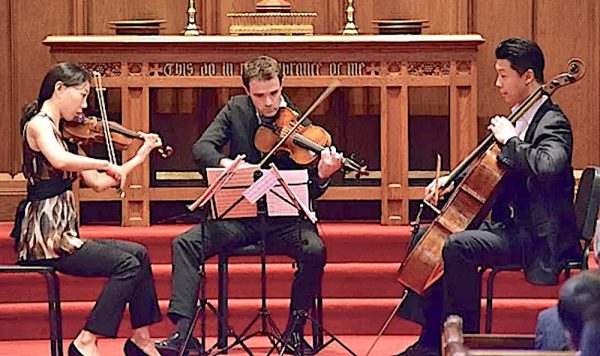 The Musical Arts Series in Port Clinton welcomes back the Detroit Symphony Orchestra String Trio, one of the most popular performing groups of past seasons. The same group of youthful performers who visited Port Clinton in the past will perform the Schubert String Trio in B flat Major, D 471, and the Mozart Divertimento in E flat Major, K563.

Sponsors for the concert are Roth & Bacon, Attorneys at Law, in memory of Joy Roth; Shumaker, Loop and Kendrick, LLP; and Jack Hilbert.  Admission at the door is $15. Students are admitted free.  The audience is required to wear face masks.

The Detroit Symphony Orchestra String Trio will feature Yoonshin Song, acclaimed as “a wonderfully talented violinist whose sound and technique go well beyond her years.” She was born in South Korea, where she began musical studies at age 5.

Violist Eric Nowlin has performed extensively throughout the United States as well as abroad. His performance of Berlioz’ Harold in Italy with the Detroit Symphony Orchestra and conductor Leonard Slatkin was described by Classical Source as “outstanding . . . his distinctive timbre and sovereign musicianship at one with Slatkin’s perfectly paced account is totally compelling.”