My Camp Perry Experiences: The Good, the Bad and the Huts 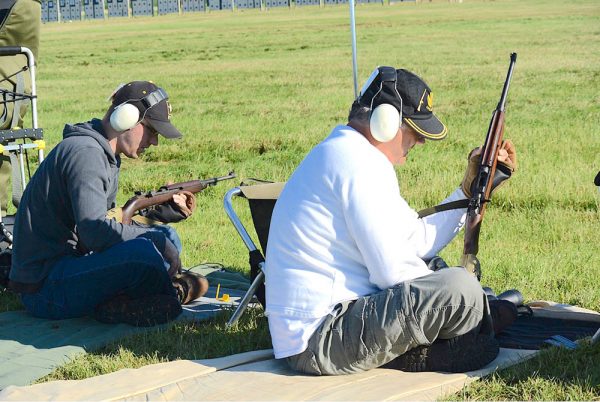 Doug Stahl and his son, Andrew, of Ferndale, Mich., compete at the National Rifle and Pistol Matches at Camp Perry each year in both modern and vintage military rifle events.

“Ah, yes – the old huts and the tornado-damaged Mess Hall. Drawing linens from the military, and the wonderful bathrooms. Those were the days…”

For Doug Stahl, 68, of Ferndale, Mich., not every memory of the National Rifle and Pistol Matches at Camp Perry is glamorous, but that doesn’t mean he wouldn’t gladly live it all again if he had the chance.

His interest in Camp Perry, located in Port Clinton, began after seeing it highlighted in an issue of the American Rifleman magazine, back in the 1970s. Though he didn’t immediately jump on the opportunity to make the trek to the shores of Lake Erie, where Camp Perry is located, Stahl stowed the place in his mind for another day.

A firearm lover, he purchased his first M1A rifle in 1972 – a Devine, Tex., version – and wanted to test its accuracy at longer distances. Unfortunately, his desire was stifled by the 100-yard limit of the public ranges around his home.

Stahl thought back to the ad he had seen and, with an insatiable itch to really see what his rifle could do, decided to make the details fresh in his mind.

“Things were a lot different then,” he said.

Pulling onto the historic National Guard base for the first time – checking in for housing across from the large Mess Hall in the building where he also drew his linens. Housing consisted of the original World War II Prisoner of War huts that stood in steady rows across the base.

“The huts were in various states of condition and, unlike today, you may have had random roommates,” he explained. “The bathrooms were basically not configured for any privacy, with gang showers and open commode stalls. It was very spartan accommodations.”

The redeeming quality of having to endure the lack of privacy was the base’s Mess Hall, which Stahl said featured decent meals for an inexpensive price. Guests to the Camp Perry post could also see a movie in the famous Hough Auditorium, on occasion.

As for matches, Stahl signed up for the Small Arms Firing School and President’s Rifle event, where he would finally be able to stretch his rifle’s reach to 200, 300 and 600 yards.

“I suppose what kept me returning was both the opportunity to shoot at longer distances and the personal challenge of improving my shooting at those distances,” he said. “Then, too, there is the interaction with other shooters and hearing some of their stories and experiences.

“One can easily pick up pointers on shooting, but just as easily learn bad habits,” he teased.

The years went on, and Stahl’s son, Andrew, began tagging along for the Camp Perry experience, starting in 1990 when he was just eight years old. He wasn’t of the required age to shoot at the time, but Andrew still kept his eye on his father, waiting for the day when he could get behind the trigger himself.

Eventually, that day came, and the two began signing up for more and more events at the National Matches, like the M1 Carbine and Garand matches. Stahl said being able to make the trip to Camp Perry allowed time together with his son while also developing a traditional father-son competition that seemed inevitable as Andrew grew older.

In more recent years, the pair has taken on the M1A match as well. Sadly, no matter how hard he tries, Stahl just can’t seem to get Andrew interested in the vintage M1903 Springfield rifle (but, he’s not giving up on that dream quite yet).

“I like the challenge of the ‘03 match, personally,” Stahl admitted. “Frankly, (as far as events) I pretty much enjoy them all.”

Anyone who has ever been to the National Matches knows a few of the aspects that are more challenging than hitting the target are the unpredictable summer elements and the disturbances of nature (and boating tourists) that can arise on match days.

“Between the sweltering heat, the pouring rain, heavy fog, the mayflies, the mosquitos and pit duty, we have experienced interesting conditions,” Stahl said.

He spoke of one year when the fog was so thick, targets were hidden for more than an hour into the scheduled time of the match. Another year, it was so wet that there was standing water between the ready line and the firing line – with some competitor rifle stocks swelling up from the humidity and unable to fire.

Cease fires on the ranges for boats creeping into the impact area of the lake located directly behind the Camp Perry target line and bald eagles soaring along the shore are also common disruptions on match days – but, it’s all part of the rustic, yet unquestionably enjoyable, National Matches experience.

Stahl and his son, Andrew, have invited others to join them on their annual trip over the years, including Andrew’s college housemates and even his mom and sisters – some more indifferent (but graciously tolerant) than others.

“My wife and daughters were less than impressed with the accommodations,” he joked. “Especially when on one occasion, someone tried to hook up an air conditioner in one of the huts and blew out the power for the whole row.”

His wife, Dorothy, eventually attended the Pistol Small Arms Firing School with him in 2017. As part of the deal, they didn’t stay in the huts.

Whether hooked for life or leaving it to a once-in-a-lifetime experience, it’s undeniable that the National Matches leaves a lasting effect on everyone. From the most experienced competitor to those simply giving marksmanship a try, there’s a place reserved for them on the ranges of Camp Perry (and, they might even have a little fun).