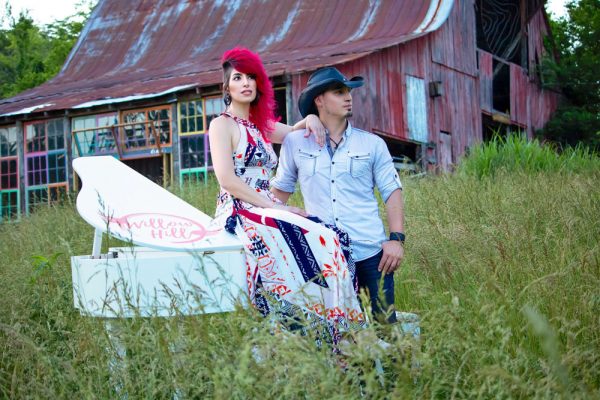 Willow Hill, featuring husband and wife duo Alexandra and CT Fields, are on the MOM Stage in downtown Port Clinton on Friday, June 3 at 7 p.m. They’re being reviewed as Nashville’s newest sensation and called a “Band to Watch” by Rolling Stone.

The charismatic husband and wife duo of Alexandra and CT Fields, the stars of Willow Hill, have developed a groundswell fanbase with their fun-loving energy, heartfelt storytelling, and a captivating high octane live show that has made them a staple at major events and festivals all over the world.

They’ll take over the MOM Stage on Madison Street in downtown Port Clinton on Friday June 3 at 7 p.m.

Regularly touring both internationally and nationally up to 200 dates per year, Willow Hill previously fronted the acclaimed rock group, Lovebettie, which was a regular name at major festivals like Sturgis, Rocklahoma, Warped Tour, and Summerfest – where they supported the legendary Pat Benatar and won the Emerging Artist Series.  The group was also voted in the top 3 out of 20,000 acts to perform at The Grammys, and performed The Official Lady Gaga Afterparty for her Monsters Ball Tour.

Willow Hill has toured the United Kingdom, Ireland, Netherlands, Switzerland, Germany, Virgin Islands, and a majority of the entire United States, sharing bills with multitudes of national acts including Miranda Lambert, Zac Brown, Aaron Lewis, Jason Aldean, Chris Lane, and many more in support of their debut album, Highway One. Recorded at Nashville’s historic Benchmark Studios, Highway One was produced by Zach Abend and Jeff Cohen, who’s credits include Sugarland, Big & Rich, and The Band Perry. Highway One immediately gained steam and slingshotted the band into showcasing for multiple major labels, and some of the industry’s biggest tastemakers.

Check out Willow Hill at www.willowhillmusic.com, www.facebook.com/willowhillmusic or find more music and dates on Spotify and iTunes.