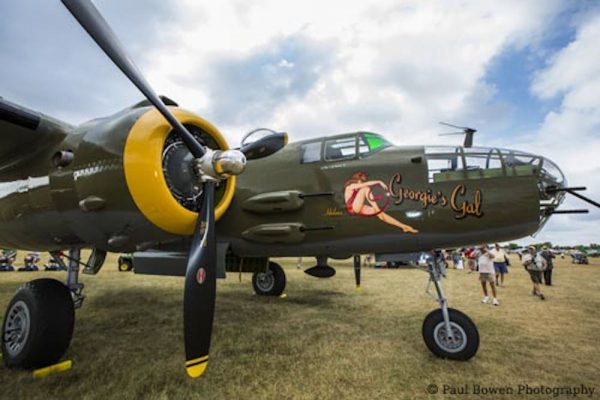 An authentic B-25 Bomber, Georgie’s Gal, will fly over the crowd during the ceremony. (Liberty Aviation Museum)

The First Shot Ceremony serves as a welcoming event for guests, participants, volunteers and staff eager to start the 2022 National Matches – an event that has assembled marksmen and women at Camp Perry since 1907.

The first CMP National Matches of the 2022 season will fire on July 12, beginning with the pistol series, and will conclude on Aug. 12, following CMP’s lineup of long range rifle matches. Whether an experienced competitor or new to the sport, the National Matches calendar also includes several highpower rifle, smallbore rifle and air gun competitions and clinics scheduled throughout – ready to accommodate the thousands of visitors expected to participate in the annual event. 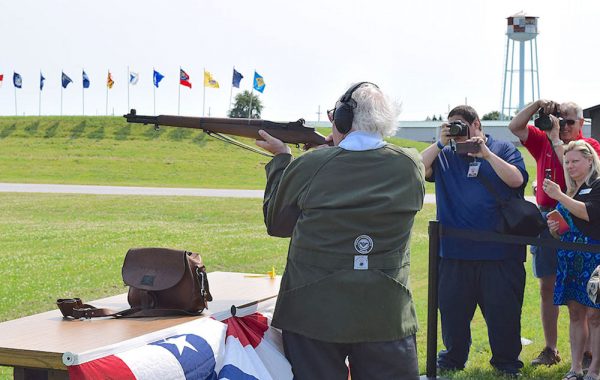 Each year, the National Matches begin with a ceremonial first shot on the Camp Perry grounds.

The First Shot Ceremony will be on Camp Perry’s Rodriguez Range. Fully open to the public, spectator seating will be set up alongside the range, with additional bleachers placed diagonally in front of the Lawrence Road Shooters’ Plaza, where the ceremony will take place. Roads will be blocked to keep traffic away in the area immediately surrounding the Plaza, with ample parking available around Camp Perry.

Sights and sounds at the First Shot Ceremony will include an authentic B-25 bomber, Georgie’s Gal, courtesy of Port Clinton’s Liberty Aviation Museum. The fascinating aircraft will make passes prior to the start of the festivities at approximately 9:45-10 a.m. as distinguished speakers and military guests fill the Plaza below.

Firing the ceremonial First Shot (or, First Shots, in this case) will be CMP’s Board Treasurer, Jon Bengston, and CMP’s Board Secretary, Harry Sieben. Bengston will use a 1903 Springfield rifle. Sieben will fire a M1 Garand rifle.

While on the grounds of Camp Perry, visitors are encouraged to check out Petrarca Range, located next to the Plaza, and the Gary Anderson CMP Competition Center, only a short walk away. Petrarca Range contains an outdoor line of CMP’s electronic targets, while the Gary Anderson CMP Competition Center features an indoor air gun facility and authentic Olympic memorabilia from the career of celebrated marksman, Gary Anderson. Both are open to the public weekly.

For more information about the National Matches, visit https://thecmp.org/cmp-national-matches/.