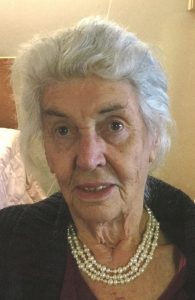 Neilma Budd, MD, MBBS, LRCP, Associate Professor Emerita of Pathology at University of Toledo Medical Center. Neilma passed away peacefully at home in Port Clinton on Saturday, Nov. 5, at 4:30 a.m. aged 88 years, after a productive life domestically and professionally. She is survived by her loving husband to whom she was married for 64 years, Dr. Geoffrey Colin Budd, Ph.D. She was the daughter of Dr. Armand Staunton and Barbara Staunton who preceded her in death as did her older sister, Jennifer Turner. Her surviving sister is Susan Bee.

She will be greatly missed by her children: Philippa Morgan of Peoria Illinois, Churton Budd of Toledo (deceased October 2016), Stephen Budd of Tucson, Ariz., Benjamin Budd of Port Clinton and nine grandchildren. A memorial will be announced and arranged in the future.

Neilma was born in London, England and attended Henrietta Barnet School and St. Georges Hospital Medical School, University of London. She was also a graduate of the University of Toledo Medical Center (formerly Medical College of Toledo) and a resident in Pathology and later became Assistant Professor and later Associate Professor of Pathology at the same institution. She was involved in the education of medical students and nurses and published several research papers in medical scientific journals. She was frequently observed sketching colleagues when attending meetings and social events.

Following retirement in 1998, Neilma enjoyed creative pursuits, including drawing, painting, sculpture and pottery in Ohio and in Arizona. Her love of drawing and painting was expressed as a member of The Group of local plein air painters in the Port Clinton and Marblehead region. She also doted on her 9 grandchildren, being heard from time to time to say “go and find your brothers and tell them that they mustn’t”.

Written by Clara Harner in 1934, the year of Neilma’s birth