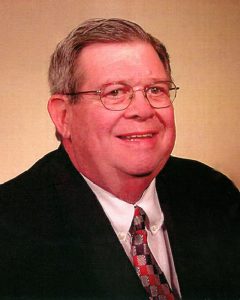 He was born March 23, 1935, in Bucyrus to the late Charles W. Sr. and Mary (Geiger) Kimerline. After graduating from Bucyrus High School in 1953, Nelfred served in the Air Force from 1954-58 in intelligence analyzing aerial recognizance photos. He married his high school sweetheart, the former Janet C. Fowler, on May 1, 1955, sharing 63 years of marriage until her death in 2018.

After his time in the service, Nelfred earned his undergraduate degree from Capital University in Columbus. He continued his education at the University of Arizona School of Law. He then practiced law in Tucson before moving his family back to Bucyrus to start his own law practice. He later joined the firm of Scanlon, Berger, Garner, Kimerline and, in 1977 was appointed to the bench of the Crawford County Common Pleas Court, a seat he filled until he retired in February 2002.

Nelfred will be remembered for his love of family, people, and community. He took joy in attending his children’s and grandchildren’s events. Many referred to Nelfred as “The Smile Maker” as he never met a stranger, nor did he shy away from sharing of his trademark jokes. At home he enjoyed lots of “Vitamin K” (his codeword for a delicious Klondike Bar), the company of his dog Chelsey, and settling in to watch the Cleveland Indians or Browns. He also loved helping youngsters by volunteering to read to elementary students and supporting Boys’ State programs. He was an Eagle Scout, entrepreneur, tomato grower, fisherman, boater, and motorhome traveler. He and Janet enjoyed trips all over North America, but he always loved Lake Erie best where he could enjoy his “Live Screen TV” and “Perch on the Porch” from his retirement home.

Nelfred was a man of deep faith. He was baptized and grew up at Good Hope Lutheran Church. The ministry of Pastor Rebon and his congregation also had a profound impact on his life. After moving to Marblehead, He and Janet worshiped at St. Paul Lutheran.

In addition to his parents and wife, he was preceded in death by brother Charles Jr. “Butch” Kimerline and his wife, Carol.

Services for Nelfred Kimerline were held on Tuesday, Dec. 27, at Wise Funeral Service, 129 W. Warren St. in Bucyrus. Family received friends, and the funeral was held with Pastor Dan Rebon officiating. Burial followed in Oakwood Cemetery with military rites by the US Air Force Honor Guard and the Bucyrus Veterans Military Funeral Detail.

Rather than sending flowers, please consider a donation made payable to Caitlin’s Smiles. These gifts will be accepted through the funeral home. Memories and photos are encouraged on Nelfred’s tribute page at www.wisefuneral.com.