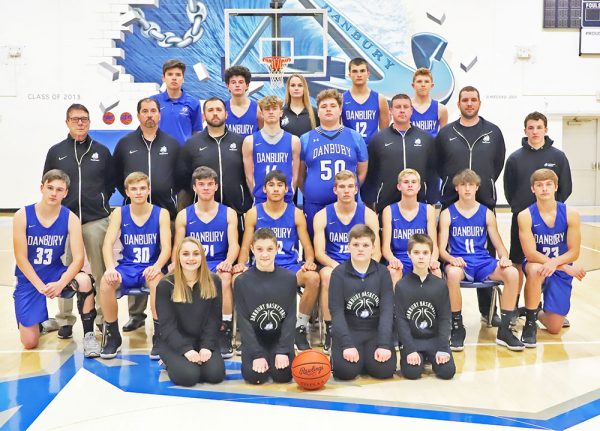 Forecast: The Danbury Lakers have a new coach in Keith Diebler, who brings a resume filled with credibility.

Diebler has coached at seven other schools and has a wealth of knowledge and experience, plus a state championship he won at Upper Sandusky in 2005 and well over 300 career victories.

Danbury has stumbled in recent years. They’ve not won more than seven games since 2010 and haven’t won a tournament game since 2009. Former coach Nate Keller helped the program progress in his three years at the helm, but resigned after last season.

Nate Frattaroli is lost for the season, 6-1 guard/wing Kaden Conrad (4.9 ppg) is still recovering from an injury sustained playing football and 6-0 wing/post Kody Sieger has a broken arm that could keep him out until Christmas.

“We had a bunch of injuries with football. We’re just working on a 7-8 man rotation,” said Diebler. “As things develop, we should have a good idea (of what our rotation will be).

“We’ve got Kory (Berhent) and Tyler (Murray), two seniors. We have some juniors that are really stepping up, guys like Beau Buchanan, Brandon Wunder and Tommy Owens. We’re rounding out with sophomores — Brad Murray, Danny Harris, Alex Frank, Grayson Clark, Andy Zelms and Daniel Webster — that are on our varsity roster and we’re filling (out) the rotation.”

Diebler is not going to try and fit a square peg into a round hole. Instead, he’s going to cater the offense to the team’s talent.

“What we’re trying to do is look at what we can do based on our skill level and what our talent presents. We have to play each possession one at a time and cut down on our mistakes. We’re going to morph into what is good for us as a team down the road.

“I would say we’re learning and hopefully coming into the gym and getting better everyday. At this point, working on skills and learning (is important). The big thing is worrying about where we are. Let’s not worry about the next practice. Looking ahead always gets you in trouble. We take each moment one at a time.”

The defense is pretty basic at this point.

“We’re playing man-to-man defense,” Diebler said. “Hopefully, it evolve into something a little bit more to fit our talent.

“Our goal right now is to come together as a team, and do our part to make this team a team and to make it better. I’m excited for the kids. It’s good to get back (into coaching).”