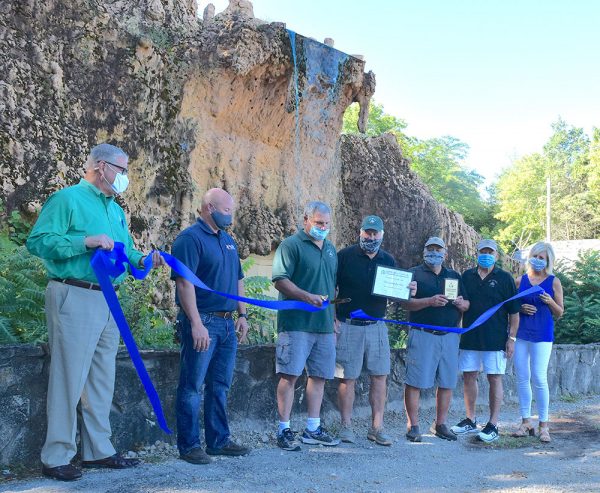 The Forest RV Park had its ribbon cutting recently in Marblehead, with the East Harbor Road property showing off its 108 campsites with all of the latest amenities. From left to right are Lara Bischoff, Jim Deer and Andy Schlotterer of the Marblehead Peninsula Chamber of Commerce, Milo Sana, Mike Antonyzyn, Bob Stanley and Dale Hlavin of Takedown Investments LLC and Executive Director Teri Cassell of the chamber. (Photo by D’Arcy Egan)

There’s a new neighborhood in Marblehead, with Takedown Investments removing a prehistoric icon and replacing it with The Forest RV Park, 8232 E. Harbor Rd. Offering the latest in campground amenities, it is designed to make the RV/trailer campground a summertime home away from home for vacationland visitors.

Since 1953, the property had been the Prehistoric Forest and Mystery Hill, featuring tours through a dinosaur-infested forest with plenty of optical illusions until it closed in 2010. Having enjoyed spending their summers in the area, Mike Antonyzyn and his wrestling buddies had better ideas for the property.

“We were involved with high school wrestling for many years, and agreed that teaming up to turn the old Prehistoric Forest into a brand new RV park would let others enjoy the area as we have,” said Antonyzyn, the long-time wrestling coach and head of special education at Westlake High School. Also members of the team are wrestling friends Mike DeAnna, Milo Sana, Bob Stanley and Dale Hlavin.

“We’ve had a family cottage in the Gem Beach for 36 years. We spent a lot of weekends and summers there, always having a blast,” said Antonyzyn, better known as “Coach Ant” during his wrestling days. “I love this area, and after I retired from teaching and we sold our home in Westlake, we’ve become year-round Catawba residents.”

Wrestlers are known to be tough guys, and Antonyzyn said his crew had to be very hardy in order to complete the 108 RV sites, six bathrooms with showers and underground water, sewer and power lines. The Marblehead Peninsula is home to the LafargeHolcim limestone quarry, and you don’t have to dig very deep to find solid limestone rock.

“The one thing I wanted to keep when we were removing the prehistoric Forest, though, was the mountain in the front section of the property,” said Antonyzyn. “It’s still a waterfall, and we’ve replaced the water pumps and installed colorful lights. It’s really cool to see it at night.”

The Forest RV Park is a seasonal RV and trailer campground spread over 10 wooded acres. It is not a transient campground, though, offering seasonal memberships. Antonyzyn wants Forest RV Park to be a friendly neighborhood in the summer, where campers become neighbors and friends, enjoy boating and fishing on Lake Erie, and the wealth of the tourist attractions around Ottawa County.

The campground offers 30-foot by 40-foot lots, 50-amp electric, city water and sewer hook-ups. It is open from April 15 to Oct. 15, and also features a playground, pool, camp store and its World Famous Volcano.

“We’ll have events planned for most weekends during the 2021 season,” said Antonyzyn. For more information visit theforestrvpark.com.

“The Takedown Investments crew are all active partners and have been sharing the workload putting all of this together,” Antonyzyn said. “We all have a keen interest in making Forest RV Park a family-oriented, fun place to spend the summer.”