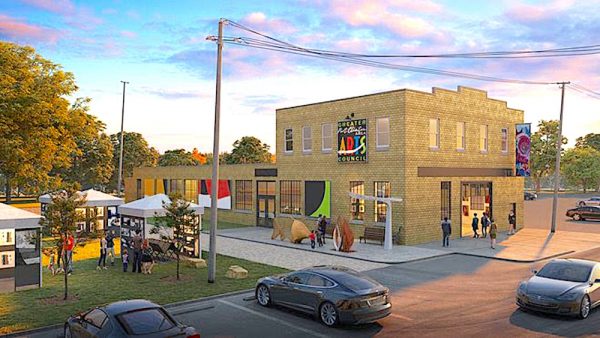 The Greater Port Clinton Area Arts Council is moving forward with plans to turn the former Port Clinton city garage property at the corner of West Perry and Harrison streets in Downtown Port Clinton into an arts and cultural center. Todd Fodor of Level Heads created this rendering of the proposed The Arts Garage.

The Greater Port Clinton Area Arts Council is diligently working this winter to brighten the look and spirit of downtown Port Clinton. A second Fish Sculpture will soon be installed at Waterworks Park in Port Clinton, and Todd Fodor of Level Heads has created a rendering of what the art group’s proposed The Arts Garage will look like on the corner of West Perry and Harrison streets.

The GPCAAC has been moving forward with the idea of turning the former city garage property into The Arts Garage, an arts and cultural center. Community members, artists and board members have been meeting regularly to determine what all the components of the building could be, according to Board spokesperson Catharine Hadley.

Barbara Radebaugh led the branding committee through a pair of brainstorming sessions to come up with a name for the project: The Arts Garage, or TAG. The plans for the building are to include all types of art for all types of people who are interested in art.

The GPCAAC Council was founded in 2009 to provide the communities of Ottawa County support in fostering a cooperative effort between artists and the public to promote the creative arts in the region. 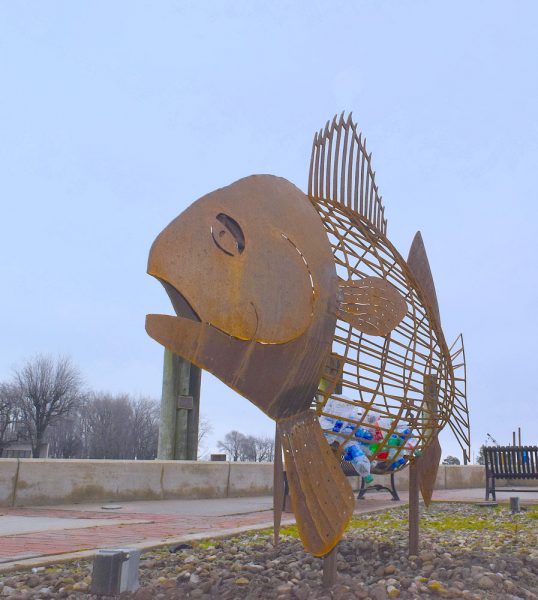 The Madison Street Fish Sculpture, a recycling center for plastic bottles at the north end of Madison Street in Downtown Port Clinton, has been so popular that a second “fish sculpture” will soon be put in place at Waterworks Park.

The inaugural Fish Sculpture was put in place a year ago at the north end of Madison Street in Port Clinton in front of Port Clinton Fisheries Inc. on the banks of the Portage River. With a grant from the Ohio Arts Council, the GPCAAC spent $5,000 to build the 10-foot long, 5-foot high metal fish sculpture designed as a receptacle for plastic bottles and aluminum cans, helping to keep the downtown area free of trash.

Josh Setzer, an arts teacher in Port Clinton, modeled the inaugural Fish Sculpture after one of Port Clinton’s favorite, the popular Lake Erie walleye, and Fabricator Cory Gabel created it. After all, Lake Erie is the Walleye Capital of the World, and this year Ohio Division of Wildlife officials boasted it offers the world’s largest population of the popular game fish.

The second fish is being created with help from the Stensen Fund. The arts council has plans for a total of three fish sculptures.